Due to various circumstances the Monday night crew was down to three regular players. +Tim Shorts  of Gothridge Manor, +Chris C. of Clash of Spear on Shield, and Josh. Luckily +Joshua Macy  of Tales of Rambling Bumbler answered the call.

The Scenario
On the northern edge of the orc infested forest of Dearthwood lies the mining village of Phandelver. Phandelver is one of the many communities surrounding Tain, the bastion from which the Invincible Overlord is launching his attempt of cleansing Dearthwood of Orcs and claiming it for his own.

Gundren of the dwarven Rockseeker clan is in the City State of the Invincible Overlord organizing supplies to exploit a potential rich mining claim being exploited in the hills to the northeast of Phandelver. He sends a wagon north with a group hired from the Mercenary's Guild of City-State and rides ahead on a fast pony to get things organized. 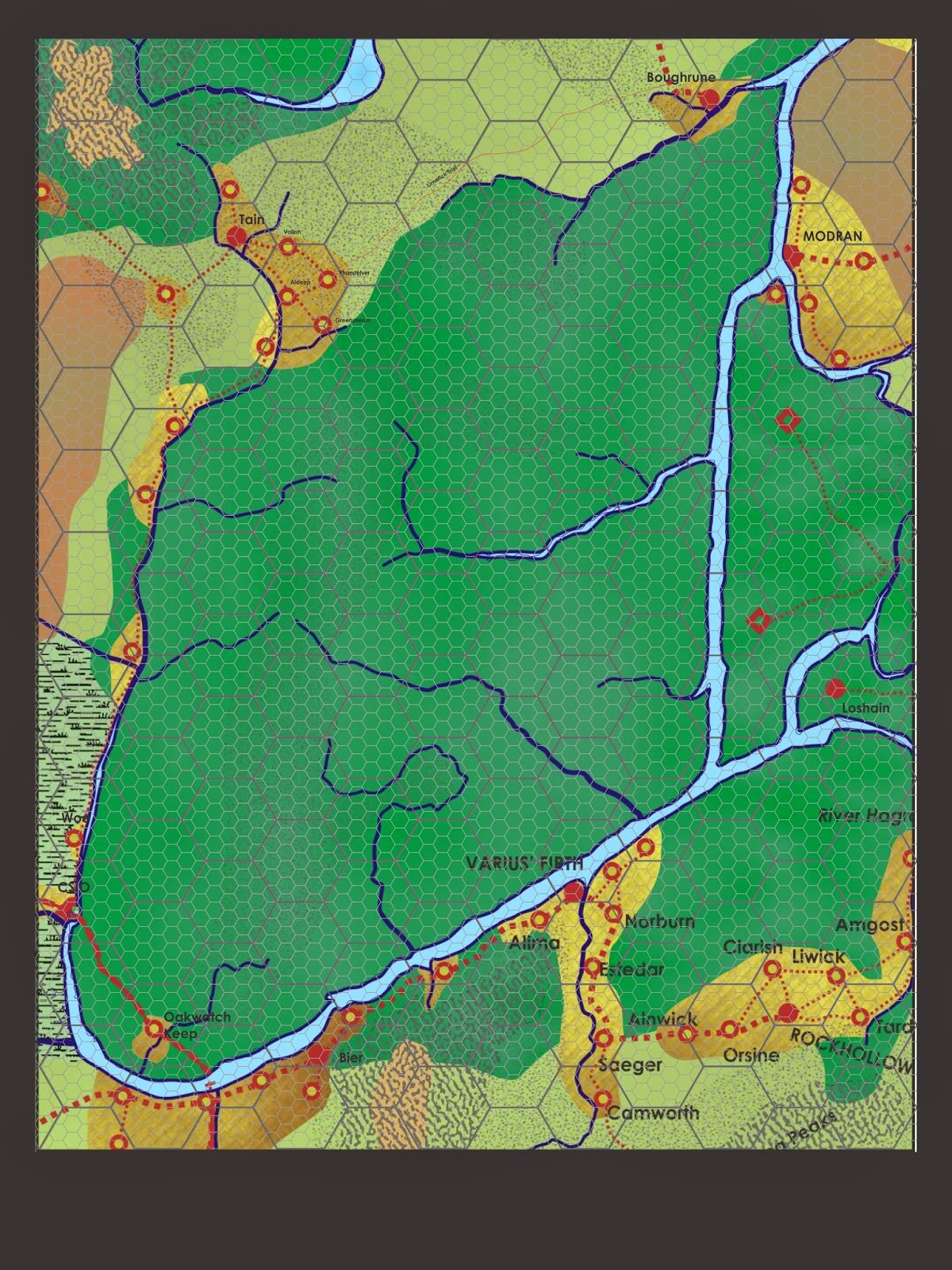 
The Game
The session started out slow as everybody entered in their characters. We are taking advantage of Roll20's new options for character sheets. Not only the webform looks like a character it has basic automation features like correctly rolling the dice for an attack or skill.

One thing that took getting used for this particular sheet was the fact it was always rolling 2 d20s. The idea if it is a normal roll you just used the first number. But if you had advantage or disadvantage you use both numbers.

After getting everything setup we started out in City-State. My usual style, particularly for a new system, is freely allow unsolicited comments about the rules. I let Joshua know about this. During the game this proved to be a great help as he extensively studied rules beforehand.

The party was in the Seahawk Tavern meeting with Gundren where he outlined the parameters of the job, and their pay. He was going to ride ahead to get there sooner but expected the party to arrive in seven days. Gundren expected little trouble with orc or goblins along the journey. Explaining that things were unduly peaceful for the past year.

Their last night in City-State and journey was largely uneventful. However four hours outside of Phandelver they ran into some an ambush set by four goblins of the Troll Skull tribe. Note that I was going to reskin the goblins as small orcs but I was caught up in the game and just blurted out goblins, sigh.

So I had the party roll perception rolls. They didn't do too bad but unfortunately the goblins rolled various 20s for their stealth check. So they got a surprise round. Which of course immediately took out Ara and Squirrel knocking down to 0 and their death count. Next round only the dead wizards rolled higher initiative than the goblins.

The goblins then shots at the remaining party members including the driver of the wagon, Alfred. Vognur takes an arrow through the thigh nearly crippling him, while a pair of arrows killed Alfred. Desparate Vognur summed his last reserve and leapt out of the wagon, while Sidwin covered him with his shortbow shouting at the Goblin, "run before rest of our caravan gets here. Despite the missed shot he was convincing enough to cause of the goblins to hesitate.

Ara started rallying from his near fatal arrow shot. Squirrel eyelids fluttered and despite his weak constitution he crawled behind some cover on the wagon and looked around the battlefield (rolled a 20 for a death save giving him 1 hit point and consciousness).

The Goblins seeing the warrior charging shot wildly. One arrow grazed off the warrior's armor, and other stuck in his shield. Unfortunately Vognur's sword blow went wild after his charge. Taking advantage of the Vognur's distraction, Sidwin shot a goblin and lodges an arrow into its face coming to to rest inside the skull.

Focusing on the remaining goblins, Squirrels summoned a mystic force to put the goblins to sleep, trusting in  that Vognur's constitution will allow warrior to stay awake. Only one goblin fell into a deep slumber. But that was enough to break the morale of the remaining goblins. They both tried to break and run for it. But between Vognur's sword and Sidwin's bow they both died.

The remaining goblin was tied up for questioning as the party rested. They learned that there was lair nearby.  However the group decided to get the cargo to Phandelver and their 100 silver payment. Luckily Vognur was skilled at being a teamster and could drive the wagon.

Arriving in Phandelver, they immediately saw Barthan's Provisions, their destination. When Barthan checked over the manifest, the party was paid their 100d each. It was learned that Gundren never arrived. Taking stock the party decided it was best to spend the night at the Stonehill Inn and then head out in the morning to see if they can find Gundren at the goblin lair. They also learned of the Redbrands, a gang of thug in charge of everything except for the Miner's Exchange.

After securing lodging and eating a meal the group retired for the night. All except for Sidwin who decided to check out the Redbrands at their favorite watering hole the Sleeping Giant. After looking it over he returned to the inn. Along the way back he noticed a Redbrand lookout keeping an eye on him. Sidwin quickly turned a corner and was able to shake his tail. Then he turned the table and followed the Redbrand for a short while before retiring to the inn.

And that where we left it. Hopefully some more of the Monday night gamers will be able to play next week. And Joshua Macy was great to have as an addition to our group.

Pro
Gamewise 5e is pretty much like the other clones I ran. It has details in its mechanics but it is well within the OSR ruleset I played before. The skill of the referee is of paramount importance in running a successful 5e game as there is little to fall back on in terms of mechanical detail.

Once I dug into Phandelver, I found it to be a basic but well executed sandbox. Basic because the various plot threads running through the locales can be exhausted within a few weeks of play. But well done because what there make sense, follows from the premises, and makes for an interesting adventure.

Con
The only major con is the organization and layout of Phandelver. Too many words and it is not laid out well for play. I would give it a C-. The layout not terrible but not good either for a sandbox. Here to hoping for a decent third party license so I can put my money where my mouth is at.

It was a really fun game last night Rob. I'm looking forward to next week!

Yeah, it was fun learning the new system. Trying old things out again.

Interesting. This is the first actual play report from 5e that I have read where the players had any trouble whatsoever. Good job hangin in there.

+Scott Anderson I seem to be more of a kill DM with newer editions. I had several total party kills with 4e games I ran. And when I rolled those first batch of rolls. I though to myself "You got to be shitting me. I am going to kill the party on the very first encounter of the very first game I run with the released rules!"

Then Josh rolled a 20 on his death save which greatly evened the odds.