Joining the Wilderlands of High Fantasy Map together.

With the successful conclusion of the Judges Guild kickstarter it would be good to explain how to join the maps together. Those of you with maps from the Necromancer boxed set or the original maps can immediately try this for yourself.

Judges Guild's The Wilderlands of High Fantasy was one of the first publishers to deal with the issue of subdividing a setting into a series of adjoining hex maps. They used 18 hex maps arranged in a three maps across 6 maps vertically 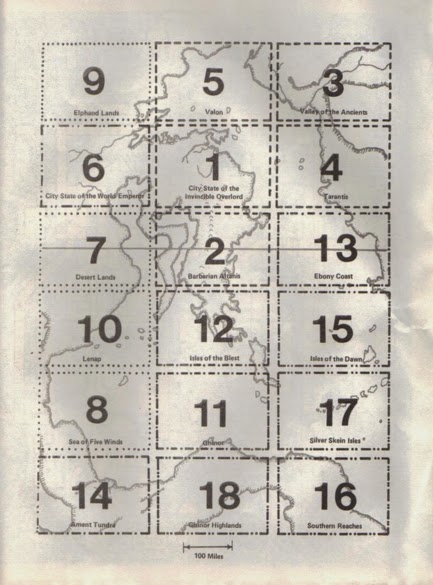 Each Hex maps had 52 columns, and 34 rows on the odd columns (1,3,5, etc) and 33 rows on the even columns. The resulting hex grid had uneven ends on the left and right edges. You can see it for yourself in this PDF of a blank campaign map.

As I explained in this blog post, there are number of methods one could use to join two hex maps with uneven edges. The one that Judges Guild ultimately choose was unusual. But then again they were the very first to deal with this.

First off there two type of joins you need to look at with the Wilderlands maps. The first is on the east and west edges, the short side of the map. The second is on the north and south side of the map, the long side.

The rule for joining the maps on the long side is easy. They overlap on the bottom hex of the odd numbered hex COLUMNS. Hex 0134 of the northern map overlaps hex 0101 of the southern map. The following graphic shows this. The green hex shows where the two overlap.

The rule for joining the maps on the short side is not so obvious. The western map's 52xx column overlaps the eastern map's 01xx column however you shift the western map down one hex. So that western hex 5201 is the same as eastern 0102.  The following graphics illustrates this. 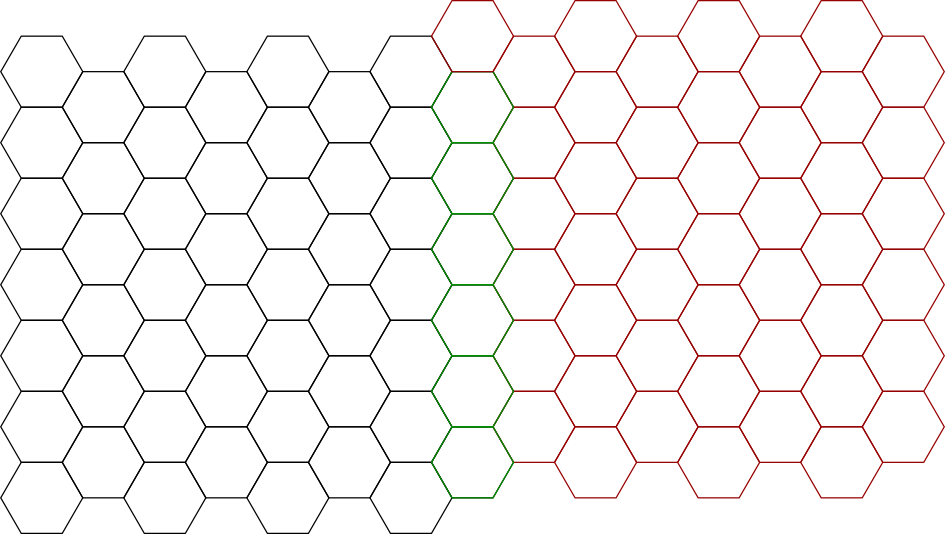 Finally the original maps have mistakes. For example the toe of the Isle of the Blest on Map 17 needs to shifted up a hex to align properly with the rest of the island on Map 11 and Map 12.  Some maps have two different villages for the same hex.  Where Map 6 Viridstan joins with Map 1 City-State the settlements are shifted down a hex on Map 6 compared to their Map 1 counterpart.

For now I will say that these issues are being resolved as Judges Guild Team go through the process of drawing the new versions. Fortunately none of the known problem will force a substantial change.

I did this very thing when that combined map showed up in one of the JG magazines. I was a little stymied by the fact that some of the maps were printed back-to-back.