Monday I ran another playtest of the roleplaying game I am working on that is based on Fudge and Fate.

I talked about the adventure I ran in yesterday's post.

Now onto the game itself.

First off I do not use the adjectives of either Fudge or the Fate Ladder.  I will provide a chart at the beginning of the rule but everything is expressed in numbers. In general if you roll a +1 or better you succeed at whatever you are doing. 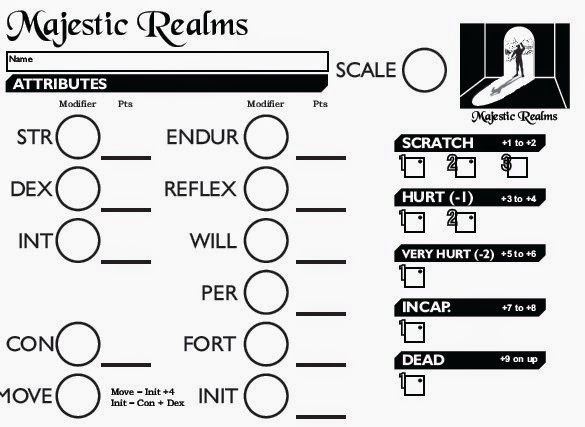 Scale represents the size and mass of the person/creature. Each point of scale is 1.5 greater size and/or mass. If a normal human averages 6 feet and is at Scale +0. A +1 Scale creature is around 9 1/2 feet tall. A -1 scale creatures is around 4 feet tall. Note that Halflings are at scale -1 while Dwarfs are at Scale +0. The dwarves are short than human but have a similar mass. Scales factor into strength, and damage rolls. As well as damage resistance.  It is a simple but elegant method that Fudges uses to handle character of radically different sizes.


You buy your Attributes in accordance to this chart.

Each skill defaults to +0 (Brawling), -1 (Sword 1 handed), or -2 (Thaumatology). You buy skills in accordance to the following chart.

Aspects
For a campaign, I recommend picking five aspects. A high concept, a trouble/complication, and three background aspects.

My take on aspects probably will be the most controversial thing about this game.  In a nutshell they replace what GURPS and Hero System uses for Advantages and Disadvantages. They can be purely roleplaying or they include additional powers and mechanics for the character. For example taking the High Concept of "A priest of Delaquain, goddess of justice." Will confer the ability of turning undead on the character. Taking one of the mage high concepts will allow the character to use Thamautology to cast spells.

YOU DON"T PAY CHARACTER POINTS. Nada, zip, zilch. You just right it down on your character sheet. So what the catch? The catch is that your referee will define the available aspects for his setting. In addition these aspects will come with consequences as defined by the referee. For example a Paladin of Delaquain will have superior abilities over that of an ordinary fighter. But a consequence is a requirement to follow the Five Fold path. And a big consequence is the undivided attention of the goddess Delaquain as you are now one of her champions in the mortal world.

So what to stop a group from having aspect like God of Thunder on their sheets. Nothing, if that how you want to play your campaign go for it. I know for me having uber power quickly becomes boring and soon I am seeking other challenges. I suspect most of you are like that as well.

You see GURPS, Hero System, Fudge and all the other point buy systems with their advantages, disadvantages, gifts, faults, talents, etc, etc are a rat race in my opinion. What does a point mean, how much work is enough to balance everything out according to cost? I been playing some of these systems so long that some are on their third or fourth cycle of rethinking costs.

What works consistently is making the mechanics reflect your setting. If a character is required to do X, Y, and Z to achieve the maximums fitness package, then that what the character needs to do during the campaign. Not trying to scrimp together X points to buy it. To fair what GURPS and other games do is recommend both. You have to do the roleplaying in-game AND have the point on hand to get whatever. However my group (+Tim Shorts +Dwayne Gillingham) we wind up ignore the points stuff after the campaign starts. Dwayne as William Enderil becomes the wealthiest man in the City-State. Does he have to buy Very Wealthy, nope it just the consquence of how the campaign played out. His points went into improving things like accounting, and his weapons skills. Maybe buying the Fit Advantage. The same for Tim's character Dracolindus who manages to become a Duke. Does he need to buy social status, nope.

This will codify what I been doing across multiple systems for the last 15 years. That many issues with mechanics cease being important if the focus on making the mechanics reflect the reality of the chosen setting.

Now right now in this playtest I don't have a lot of these aspects defined. I plan to draft a "ready to run" set of aspect to allow a bog standard fantasy campaign to be run. For those of you who have my Majestic Wilderlands Supplement can see some of these ideas in a more polished form. Particularly in my comments about how the classes and races are not "balanced" but rather reflect how the Majestic Wilderlands works.

Tomorrow we will look at combat and then in the concluding post the magic system.
Posted by Robert Conley at 7:00 AM

This is a nice take on the Fudge system. I've really had a lot of fun with FUDGE in the past, and I tended to use a combination of the "subjective" and "objective" systems defined in the '95 rules.

It's interesting that you are using the aspects rules, but without the metagamey portion of that. Aspects are pretty cool in that they can be a blend of advantage and disadvantage at the same time.

My biggest issue with FUDGE is the "graininess" of skill resolution and combat, since the dice only offer a small number of possible outcomes. I've often thought of replacing the fudge dice with 2d6 or 3d6 and use something like the original traveller method of resolution.

You say that your take on Aspects can be used strictly for role-play, or they can grant powers (such as the ability to use magic) - this isn't controversial if you're coming from Fate. What might be is the lack of a Fate Point economy and the ability to reroll or force a +2 on your rolls. I assume you haven't included those things in your MW game?

+Jason Packer. I do not plan to add or detail the Fate Point Economy.