In the concluded Swords & Wizardry Campaign, I ran an adventure in an old abandoned Hill Fort that was rebuilt into a base for the PCs. Dwayne of Gamers Closest is think about using his recently acquired Hirst Art Molds to build it up. The original map were draw on five square per inch graph paper and was a bit dense. So to make his project easier I redrew the maps and thought that the rest of you could find some use using it for your own campaigns. 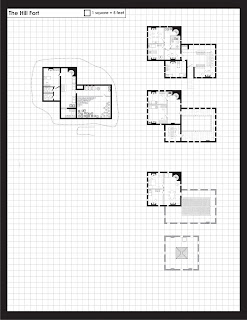 In addition to the normal size map (five square per inch at 5' per square) I blew it up to fives original size so it can be used as a battle map. The final paper size is 17" by 11" so it should be too expensive to take it to your local copying place to get it run off. Particularly that is it still greyscale.
The Hill Fort Battle Map
Posted by Robert Conley at 10:36 AM

I've gone to 1" equals 3ft 4 in when it comes to my Hirst Arts builds. That gives me a little more room for the minis and dungeon dressing, plus the walls can be in the inside of a 10x10 section, rather than the outside.