I am a Thief, A Thieves' Guild Review, Part I

Shortly after I started regularly buying Dragon Magazine (issue #38) I started seeing ads for Thieves Guild like the one below. 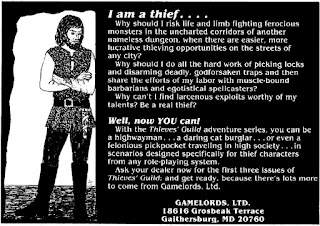 This interested me a lot, but unlike the Harn Ads I never got the chance to buy any of Gamelords releases except for a few of their unrelated Traveller supplements (they are pretty good). And because this was all pre-internet I never learned what was in them. Even today information on the Thieves Guild Supplements is pretty sparse. Different Worlds has many of the original releases still at their original prices!

Finally a year ago, I had some extra money and bought the first two Thieves Guild supplements from Noble Knights Game. While not as cheap as Different Worlds they were at a decent price and more importantly had Thieves Guild 1. Along with that I got Thieves Guild 2.

When they arrived I finally found out what was in them.

Which I will go over in Part II on Tuesday.

I didn't own it as a kid but I did play it a couple times. Some older kid ran it.

I was a pixie.

I have the full series of the original loose leaf bound supplements plus two copies of the boxed set.

I had some fun running the system but it was always frustrating that they never published the whole system.

My collection isn't complete and I have some of the original loose leaf supplements in the later reprint. I didn't know there was a boxed set, is there somewhere that lists the complete run? I'm not sure what I'm missing.

I was just settling in for a nice, nostalgic article about a game I'd never played. :(

Afterglow has a list of most of the non-core supplements. Here is the product list from the back of Thieves Guild X which I believe was the last core supplement:

The boxed set is a revision of Thieves Guild I with some new character generation rules and new scenarios. I forget if there were any significant differences in the combat rules or anything like that.

@Lead Legion, sorry it was turning into a wall of text hence I broke it up into multiple posts.

Tease. I don't remember these ads from Dragon, but now I'm intrigued. Back in the day I ran a long city campaign where the players were a rival, upstart thieves guild trying to horn in on the established guild.

Looking back, it turned out to be a street gang war without much thieving, but it was fun at the time.

Thieves Guild would support a street gang war quite well.

@Rob Nah, don't apologise, Rob. You hooked me good. I kept checking back for the next post. So it was a GOOD cliffhanger :D