I am a Thief, A Thieves' Guild Review, Part II 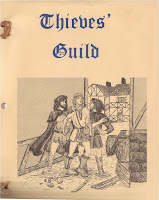 So what in Thieves Guild #1? It is basically in two sections, Rules of Play and Scenarios. Richard Meyer and Kerry Lloyd are the authors. Physically the first version of the rulebook is loose leaf punched for a three ring binder. Like Harnmaster and initial ADnD 2nd edition Monster Manual the system is modular with later supplement having new sections to insert among older sections.

This was also was probably one of the first roleplaying games to laid out and the final copy printed out from a computer. It is laid out using a dense typewriter font that is hard to read. There is a second printing that is laid out more traditionally and a little easier to read. Finally the 2nd Edition Thieves Guild reorganizes the rules and is pretty much as good as any middle tier RPG of the eighties.

The art is distinctive with humor and seriousness intermixed. I found myself laughing at some of the humorous illustrations.

This is a DnDish system that focuses on creating Thieves and in less detail many of the people they deal with like fighters and common folks. It is actually party of a larger game called The Fantasy System. Your attributes are Strength, Coordination, Reflexes, Stamina, Discretion, Intelligence, Talent, Magic Resistance, Magnetism, Appearance. These are all generated using 3d6 straight down the line. If you roll an 18 you have a chance at a very high stat of 19+

There are a diverse number of races available to play; Human, Dwarf, Hobbit, Elf (sylvan), Elf (sindar), Elf (noldor), Half-elf, Centaur, Pixie, Orc, Uruk-hai, Half-orc, Kobold, and Goblin. For some reason the Kobolds get illustrated a lot and look like ugly hobbits with really big ears. Orcs are pig nosed btw. The rules distinguish between male and female with bonuses and minuses.

Hit points are based on Strength + Stamina /2 + the character's hit dice. The hit dice is NOT based on class but rather looked up on a table that is indexed by the total of the character's stamina + strength. For example a character with a 13 strength, and a 10 stamina has a total of 23 which gives him a d8 for his hit dice.

Next is your family background which is rolled using a d1000. The different races have restrictions on which background categories they can take. For example Kobolds can not gain a noble or guild background..

Thieves guild looks mostly like a skill based system. Gaining levels through accumulating experience is how you advance your skills or choose new ones.  The other "classes", Fighters and Wizards, look like they would use the same system as thieves but have different costs and different choices of skills. Not only thieves are ever presented in any type of detail in the Thieves Guild series. Although later supplement flesh out things a bit and Second edition was going be the first in a series of book for the The Fantasy System.

Weapons have minimum attribute requirements. For example your basic Broadsword requires at least a 7 Strength and a Coordination. The boardsword does a 1d10 damage and later if the character pays for expertise it can do 2d6 damage. Finally it has a interesting stat called HAC0 or Basic Hit Probability.

Thieves Guild uses an Ascending Armor Class system!  However there no to hit bonus based on level as there in the D20 system. Instead if you are proficient in a weapon you gain it's HAC0 as your skill. For example the Broadsword has a HAC0 of 8. This means to hit an unarmored man (AC 0) you need a 8 or better on a d20. However if that opponent was wearing Scale Armor he would have AC 8. And the character would add that to his HAC0 of 8 which tell him he need to roll a 16 or better on a d20 to hit.

What interesting this works very similarily to DnD Next weapons from the closed playtest.

For skills, the players rolls for Training opportunities for his character and add the result to the number of training points for their social class. From that they can purchase various skills.  There are are a total of 44. As "The Fantasy Game: still has class and level, the thieves skills are found on a level chart similar to the one in AD&D. There are race and stat bonuses also similar to those found in AD&D.

TThe next sub-section is about the rules of play. There movement including outdoor movement. At lot of Thieves Guild, especially in the later supplement, involves activities in the rural landscape as well as the city. Next is combat which takes place in 15 minute combat round on a 5 foot grid. Thieves Guild is loaded with what is now called battle maps. There is no initiative, all fighting is considered simultaneous  after movement. If you roll 10 or better than your chance to hit you score a critical hit. Misses that are 10 or less than the chance to hit are critical fumbles. Criticals are rolled on a chart giving a variety of results. Special Combat tactics for thieves are backstabbing, coshing (whacking somebody on the back of the head with sand filled bag), poisoned weapons, and striking from concealment.

Other topics covered are
the Role of Magic (sketchy),
Ransoming Prisoners,
Revenge by ransomed prisoners (I kinda of like this)
Disguises (a page and a half of rules),
Fencing Goods,
how to create Traders and Fences,
The Thieves Guild,
what happens when you get busted, including individual magistrates.

The next subsection is a fairly extensive equipment list including

The last sub section is experience. You gain xp similarly to DnD with some additional wrinkles

Combat
Through the sale of loot from thieving
Through successful Agility rolls
Resolving encounters with NPCs.

Much of the rest of the chapter gives specific awards for each of these categories. For 1/4 of the GP value of loot fenced. Last is the XP table itself including the advancement in thief skills. First level is 1,500 xp, 2nd is 3,000 xp and roughly doubles every level afterwards until 8th. Afterwards advances by 100,000 per level.

Next is Part III the Scenarios!
Posted by Robert Conley at 7:00 AM

Ah, such a great game. We used to play this all the time back when it was new and so looked forward to the full system being released . . . which it never did.