That time I posted about my miniatures I was in the midst of painting my props stuff and orcs. I finished those and now started on new batch. This time I picked to paint all my unpainted dwarves. I just finished my first batch of seven.

The flash didn't light up things enough so here is some close ups.

One with a wicked looking pick axe thing. The sky blue of the shield means he is a paladin of High Lord, the soul forger of the dwarves. 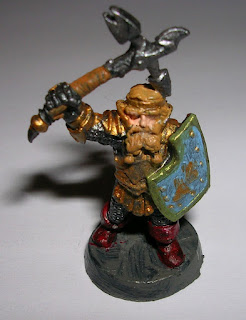 A dwarven Border Warden  with an axe. The traditional helment gear of the Warden has a red tassle to honor Rosmerta the Battle Maiden and the Sky Blue band shows their allegiance to the High Lord. 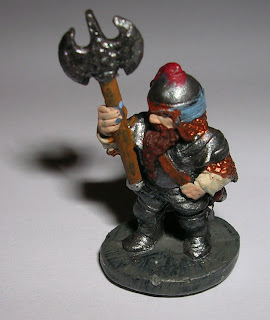 One of my original Grenadier Miniatures. These days I use this guy for a Dwarven Runecaster or Ironmaster. He has one long beard.  The green stone is a powerstone designed to store viz so that his runes and charms last longer. He smokes a meerscham pipe tinted golden brown from heavy use. 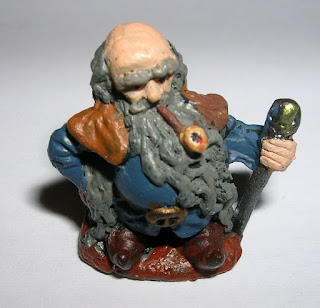 Tin can Dwarf Lord. In 3rd Edition GURPS his PD and defense was beyond belief. Probably because of  Tin Can Orc. The golden mask is a dwarven war mask designed to strike terror into the hearts of the mountain orcs. 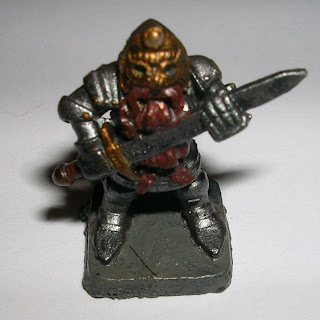 Dwarven Thief outfitted in the latest fashion from City-State. He wears a green feather plucked from a successful cockatrice kill. I think he is an original Grenadier figure. 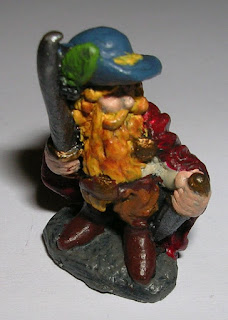 Dwarven Cleric with a broken off Mace. I just say it is a holy symbol or something like that. The Red robes means he is a cleric of Rosmerta the Battle Maiden, the dwarven avatar of Mitra. The sky blue bonnet pays respect the to the High Lord the head of the Dwarven Pantheon. 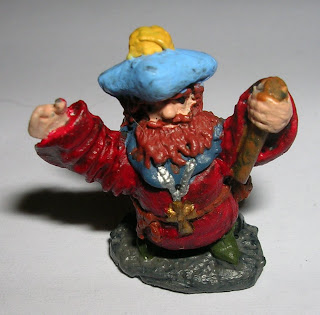 A Dwarven Adventurer armed with a Knight Killer Crossbow. With a +4 to hit accuracy bonus and 5d4 damage don't mess with him! To bad it takes nearly 6 rounds to reload. 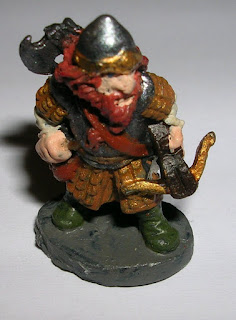 As you can see I like to come up with little stories about why the figures are what they are. They help me figure out which colors to use. The hardest thing was trying to figure out their hair color. I don't know why but I got a mental block when it came time to pick. The next batch of seven will be mostly original Grenadiers that been waiting to get painted since 1980. That will take care of the dwarves leaving the unpainted halflings and gnomes. There are two interesting figures in that bunch. One a Gnome King with his throne a tree stump and one that is two halflings with one standing on the shoulders of the other.

One new technique I used was a pin dipped in a color to do things like their eyes and spots.
Posted by Robert Conley at 7:00 AM

Rob very nicely done. They look good and the description was nice.

I really enjoy how all of your figures have character stories associated with them. Keep up the good work!