After thinking about it, I decide to play a half-orc. I figure the +1 to strength will get me the rest of the way to the prized 18/00 and the +1 constitution is nice as well. -2 to charisma is a hit especially I wanted one of Boog's goals is to build a castle to hold lots of feasts. But a 10 is workable. Along the way I rolled age and Boog is 14 years old, a young adult. Looking at the DMG, he gets another +1 constitution, but a -1 wisdom. Taking it down to a 6, yikes!

I downloaded Mad Irishman's original AD&D character sheet PDFs. I save both sides as a jpg and used them as a background in CorelDRAW to write on them. Had a lot of fun doing this and went all the way filling out everything including weapon speeds, weapon modifiers and the always fun, pummeling, grappling, and overbear modifier. Then I printed it out using some goldenrod cardstock I had stashed away. 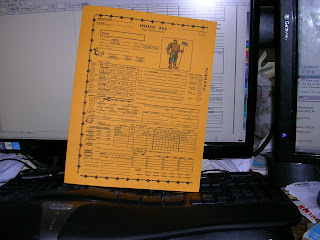 Here the completed character sheet. Boog's driving ambition at the moment is to get enough treasure to allow his ma to retire in style. I have a personality for Boog developed during a couple of convention games where I played a half-orc fighter. It a bit hard to describe, but people seem to enjoy and the inane solutions I came up with.

For those of you without CorelDRAW, you can use Paint.NET or inkscape. Just save the character sheets as 300 dpi jpg. (you need to set the option when saving from Adobe). Put them on a bottom layer. Then another layer on top where you type in your text. I used 8 and 6 point text to get stuff to fit. 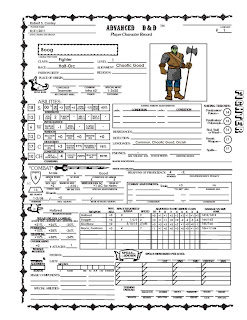 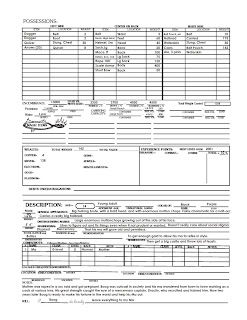