Into the Dark Lands with Boog Part I 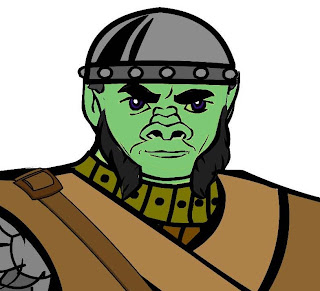 Monday Tim ran the first session of his Into the Dark Land campaign.The characters was me playing Boog and Brian playing Grim a Halfling Thief. The session was pretty good. One outstanding item as Tim's Background notes. Not only they were well written and interesting they were formatted like a professional product. You can see a copy of the campaign start document.

We started out in Jebediah's Bastion. Boog thinks that complicated so calls it Jeb's Place to himself. Boog came here to find enough gold so that his Ma wouldn't have to work in the inns anymore (she is a cook). Jeb's Place is at the exit of Wallace Pass the only way through the rugged Reznor Mountains. Beyond are the Dark Lands. Named because the of surrounding high mountains limiting the hours of full daylight. Goblins, Orcs, and other humanoids like it here and it all prime land. 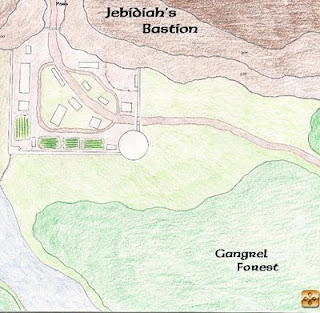 Unfortunately bad luck strikes and a major landslide covers the pass blocking the only way back to civilization. Of course the goblins hear of this and attacks Jeb's Place and thus the campaign begins.

Just to let everybody know, Tim has a distinct style of drawing maps that I think is great. I am flattered to draw maps for him and probably do better on the actual dungeon maps. But he really should use his local maps, like the above of the bastion. Especially that RPGNow has a cheap full color option (16 pages for $3 or so) for publishers to use. They are great to look at and very evocative of his setting.

The Goblin Raid
Goblin’s attacked Jebediah’s Bastion. Boog and Grim stationed at the pass exit. Ten goblins repelled down. Boog killed seven while Grim killed three. Grim gets knocked down to zero hp while going after Russell the fletcher. Boog kills the goblin, and Russell promised Boog his share of bacon, especially after Boog gives him the metal from two swords.

Grim revives and is helped to the shrine to be healed. Boog takes the swords to Henry the blacksmith and gets 8 tokens for later use. Waldron calls Boog an idiot and Boog beats him after connected with two blows. Hendrix lectures Boog about fighting but heals him anyway. Commander Sterling wants to see Boog and Grim at the tower.

Commander Sterling wants us to go into the woods and try to find the Goblin Lair. Promises us extra rations as an award and will consider it a favor. We agreed and went off to get something to eat. We talk to Corum, our friend who is also a cleric, Corum is bummed that he can’t go. Grim promises to talk to Sterling about it. We go to sleep and in the morning head out to the forest. At the gate, the soldier ask Boog to get a shield for him. Boog get him to agree to give his share of bacon for the shield.

Grim and Boog head into the forest and walk for a while. At one point Grim smells smoke from a settlement. When Boog and Grim scout around they see a boar. Boog immediately starts hunting the boar with Grim nagging at him. Boog shoots the boar and then charges it. Then fail save and get caught in a net trap set by four Goblins. The four attempt to shoot Boog but only one manages to hit. Grim sneaks around and backstabs on of the Goblins. Boog rips free from the net, while the goblns take more shots at him. Luckily Boog doesn’t take a hit. Boog and Grim take down the remaining goblins and finds one of them alive. While interrogating, the goblin reveals that the Goblin Chief has hidden his treasure in the woods and he knows where it is. However Grim had a enough and kills the goblin. We kill the boar and string it up to drain.

We head down a path and find the Goblin cave, Boog and Grim surprise two Goblin guard, unfortunately one of them gets a lucky hit and Grim goes down. Boog manages to take down both and carries Grim out of the cave. Then Boog gets the two goblin bodies and hides them outside. Hopefully the chief just thinks they ran off.

On the way back Boog and Grim spotted Smoke, one of Waldron’s flunkies, searching the ground of a clearing. After a while he finds something, notes the spot and leaves. Boog watches as Grim searches who finds a locked box buried. It is guarded by a swing tree spike trap which is disabled. The box is dug up and Boog puts it in his pouch. Boog had to make a save when he accidentally set it off while trying to hid to give Smoke a surprise.


Boog and Grim make it back to the Keep. Everybody cheers at the sight of the boar carcass. Boog and Grim reported everything but the box to Commander Sterling. Sterling agrees to have Corum accompany us back to the goblin cave. After getting Grim healed they goto the shrine to open the box. Corum doesn’t like this and thinks we should report it. Inside we find two healing potion. Grim gets one, he needs it, and Boog gets one after Courm said he would turn it in if he got it. Boog plans to give it to him at the cave.I am also in the middle of writing an account from Boog's point of view. I will post a pdf link when I get it done. The critical hit system was simple and bloody, I will leave it to Tim to post the details on that. We handled pummeling with a normal attack roll and doing 1d3 + str bonus for damage. I think it was 1/4 real and the rest subdue damage. I was real lucky to have the 18/00 strength as I think Waldron was somewhat higher than Boog.

This is a copy of the the adventure record both the front and back. 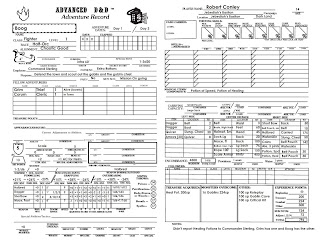 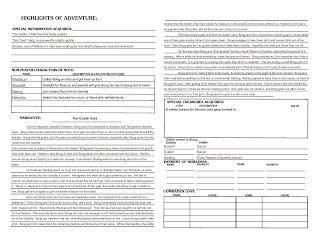 The updated character sheet front and back. 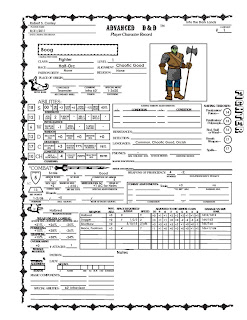 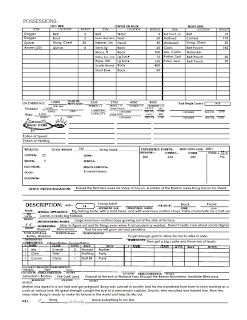 Looking forward to see what happens in the next session and having the Rusty Battleaxe join as his cleric Corum.
Note: These sheets can be gotten from the Mad Irishman.
Posted by Robert Conley at 6:00 AM

Nice!! Will there be regular sessions? And is there any way to make a podcast or something? Would LOVE to listen while you play!

The campaign is weekly. I will talk to the guys about a podcast.

Sounds like a great session. Also, that adventure record is a VERY nice document. Can you point me towards a blank copy?

By the way, that campaign start documents is very well done.