Into the Dark Lands with Boog Part II

Tim had his second session of his AD&D campaign last night. Rusty Battle Axe joined in although we had technical difficulties with Fantasy Grounds. We gave up and plan to fix it later this week. Probably something to do with firewalls and their setup. What made it strange that his gamemaster mode looked like it would have worked. But the player side didn't work. So we did voice for Rusty and trusted his die rolls. Fed him the maps through Skype downloads.Grim, Corum, and Boog woke up the next morning after the Goblin Raid adventure and got breakfast. Boog collected the extra bacon rations that were owed to him. He let the soldier (the one he gave the shield too) keep half of his bacon as Boog was feeling good about everything. After breakfast the party headed into the woods where they spotted Waleron talking with an elven mage. Mage was new to the area and not at the forts when the pass collapsed. The Elven mage went over and talked to the party and offered to take items that weigh no more than 5 lbs with him. He wants a large fee to do this. Unfortunately this meant that Boog couldn’t send his Ma a message. She is working at the Green Stag Inn at the Wayfarer’s crossing. Waleron look pissed because the party was there.

The party made it to the goblin cave without incident. Boog gives Corum the potion of healing. Once inside the party makes their way further into the caves where they find a room filled with goblins eating, sleeping, and gambling. After carefully planning, the party attacked and had the element of surprise. The fight didn’t go so well as nobody could seem to hit anything including Boog. Boog fumbled his halberd away and it nearly turned disaster when Boog critically fumbled with his mace and KOed Corum in the head. Boog and Grim managed to kill the rest of the goblin and got out of the cave with Corum. 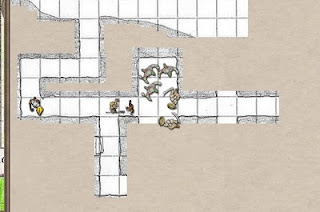 The party got back to Jedebiah’s Bastion and got Corum healed. Waleron mocks Boog for his ineptness. Boog gets Corum’s helm fixed at Henry (the smith) while Grim talks to Jonathan. Jonathan wants to work out a deal with Grim to get some goods into his shop to trade with. The party works at their jobs the rest fo the day (Grim, leatherworker, Boog, teamster, Corum, healer). The party meets Sterling that night and after giving the report Sterling arranges for a fighter named Dixin to join the party. He wields a spears and seems like a good person. That night, while trying to get to sleep, Boog wakes up after a snake bites him. Luckily the snake wasn’t poisonous according to Henderix. When Boog some back he finds Waleron and his cronies laughing at him and Boog punches Waleron in the face. Everybody backs off before the fight turns serious but Waleron and his goons back up everything and leave the fort. Waleron tells Boog that he just signed his death warrant.

The next morning Boog and the party (plus Dixin) leaves and heads to the goblin cave. They find Bear the Trapper with the crap beat out of him. Apparently Waleron and his goons attacked him and stole all his equipment including traps. Boog give Bear his special dagger (normal but a fantasy bowie knife). Bear appreciates this. The party decides to deal with the goblin cave first and head there. Once in the party try to sneak in carefully but sets off an alarm trap. The party manages to hide in time except for Boog who starts fitting a big goblin with a magic sword. The goblin is quickly killed and looted. The party heads deeper into the caves and finds a unused crossbow trap at the end of the corridor. The crossbow needs repaired to usable.

The party opens one door and find nothing, opens another and finds what looks like to be a shrine. There is a silver bowl on a altar, a dead goblin before the altar and a curtain dividing the room. The bowl is carefully taken. The curtain was open to reveal a hideous statue of a god and then a bunch of rot grubs fell on Corum and Grim. 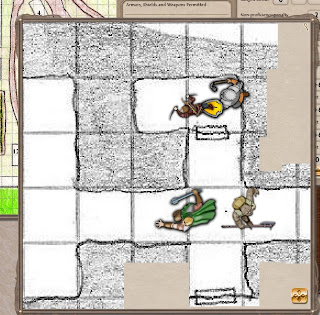 Brian got to 2nd level as Grim which is great he now has 11 hit points and better skills. Tim's critical tables are brutal but they mostly work in our favor except for Boog's head shot on Corum. Looking forward to next week.


Once again a copy of the adventure record sheet
Front side 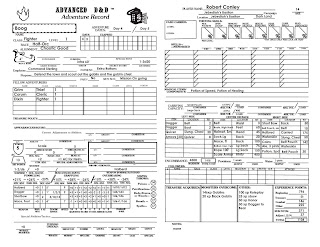 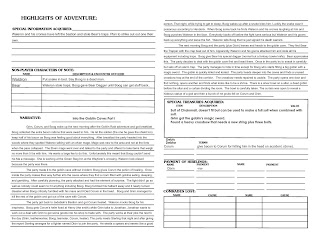 We just made a Half-Orc barbarian for a new campaign. My first thought? "Boog!" Thanks for some fun posts.

Corum still has a bit of a headache.