I did some prep for the game. Not the actual adventure of course, Instead I went through my miniature and props for stuff to use and to make the encounters visually exciting for the people attending. Here the results 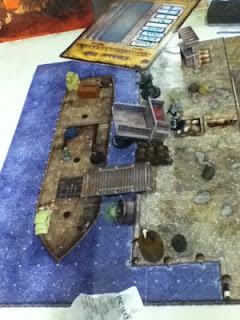 The ship encounter when the party first sails into Neverwinter. When this picture was taken, Josh's Goliath just pushed the wagon into the water on top of a zombie trying to climb onto the dock. 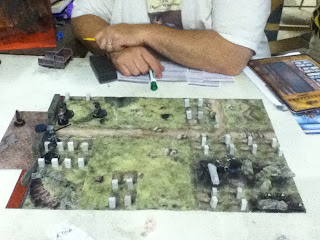 The climatic encounter in the graveyard.

The players really like this especially the newcomer who hasn't played with in my Swords & Wizardry sessions.

What was most uncanny of the whole session is what Kelly Anne, my wife, got for her character. See in the grab bag that Wizards has for each participant there is a theme care the player can use for their character. This one had to do with the character being a ex-member of the Brotherhood of the Rat (or something like that) give them an at-will power to allow them to change into a tiny rat.

Which makes this ironic is that we have adorable pet rats at home. Years ago I was skeptical and so was Kelly Anne when my youngest wanted to get some as pets. But they turned out to be great pets, a little like owning small excitable dogs rather than the boring gerbil, hamsters, and mice, Kelly Anne had when we were kids. 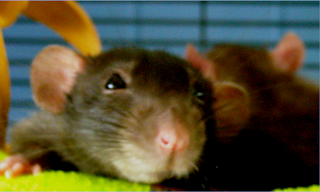 Initially skeptical at playing 4e, she was pretty exciting at playing her thief now. Especially when she had a +14 to her stealth roll as a first level character.

The session ended with one party member dead, two members down. Kelly Anne's thief was the only one still standing. The main bad guy was dead but his minions survived and dragged his body away. Overall the party was battered but succeeded in stopping the bad ritual.

While the session when well, the adventure was some of the worst crap I seen published for roleplaying in a long time. I understand constraints the authors have to operate under. I experienced some of them myself when trying to run good live action roleplaying events. The format imposes limitation on what you can do in terms of plot and the action. It results in a sequence of encounters that is a railroad. But if you write good plot and design inserting encounters the result can be fun for organized play.

But those limitations are no excuse for crap. And make no mistake Gates of Neverdeath is crap. The adventure hinges on the main guy stealing the McGuffin. The way it is written the bad guys just appears and there is nothing the PCs can do about it. Railroad combat is one of the things that will piss off players to no end.

I fixed it by bringing the bad guy on stage. I practiced the encounter the night before and so my version was fair. If the guy died I would dropped the graveyard as the location where some nasty things were setup and the guards asking the players to go and clear it out. Although this fixes the issue, it shows the problem in sharp relief. To pull this off requires luck and requires a highly skilled referee. My solution is not ideal for use in organized play where skill levels range all over the place.

To top it all off, some of the experienced 4e players were commenting how tough the monsters were. I don't play 4e on a regular basis so I had little to compared this too. But looking at the monsters afterwards, they were startled at how they are stated. The hallmark of Wizard's 4e offering is the combat encounter and I am left wondering if standards slipped on this.

Wizards should be ashamed at letting this go out with their name on it. And the limitations of the encounters format is no excuse.
Posted by Robert Conley at 6:00 AM

Great use of 2D and 3D. It really makes a difference aesthetically.

Dang Rob, tell us how you really feel. Ha. Man it must be pretty bad to have you react like that.

I agree with Tim on this one.

I assume you've had better luck with other 4e modules? Or is this not too horribly unique?