Since it was announced several years ago I thought that a D&D 4e virtual tabletop hosted by Wizards would a major change in the hobby. If probably done it would make it easy for D&D 4e players to find each other and play when it convenient for them. Especially if it had on a server/meeting room front end where players could browse and find games to play.

This benefits the rest of the hobby as this helps keep the network of D&D players healthy. Which is where most other RPGs get their players from. Also by popularizing Virtual Table Tops this will draw attention to this type of software. Making it slightly easier for us who play other RPGs, like Swords & Wizardry, and use VTTs to find players. It will also spur innovation as other VTTs strive to exceed what Wizards offers.

After a long period, we have some news, a FAQ, and a Screen Shot. Of course nobody has a lot of respect for Wizard's programming team so we wait to see if they can actually pull this off right.

To me it looks like they are going 2D and integrating their token and tile art into the product. The earlier incarnation was going to be 3D which was going to be too big of leap. I think going the 2D route will leverage the advantage in art that Wizards has and provide an achievable goal. 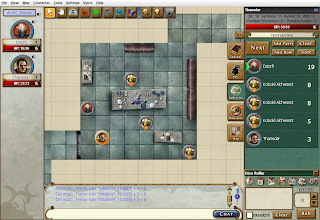 Update:
The things Wizards will need to get right to be competitive in the long run will be
If they get these right they can be "good enough" in other areas compared to their competitors.
Posted by Robert Conley at 9:11 AM

Alas, this new model doesn't ambitious enough. Fantasy Grounds II seem's to do everything Wizards have promised and more. And whats more, it has been doing it for a good few years now.
I am, once again, utterly disappointed.

I agree that Fantasy Grounds has a very good 4e ruleset and even has converters that parses Stat blocks into a form FG can use. Thus avoiding copyright issues.

The three things Wizards will need to get right will be 1) Intregration with Character Builder, 2)Use of Dungeon Tiles and other art assets, 3)A good game lobby to find other players. 4)A regular release of precanned modules similar to encounters or delves so that even the most time pressed DM can get involved.

This is excellent news, I'm waiting with baited breath. I'd much prefer a 2D roleplaying affair where they focus on gameplay rather than flash graphics.

The biggest dampener with rpgs is finding people in your area that want to play. I live in London and there are loads of people but it often involves a long trek and late night return journey :(

I'll take a look at Fantasy Grounds that Dangerous Brian refers to.

Thanks very much for sharing the news guys. Appreciated.

Sigmar
my Gallery
my Battle Reports
my WFB blog

My group is looking for other Table Top programs to use.

Cost will be the biggest issue. People aren't going to want to pay more for the DDI a month then they are WoW.

I have to agree with those who would like to stick with Fantasy Grounds 2. We have in our group been playing with FG and we love it.

When 4e first hit, I was psyched. The VTT concept that was first introduced at GENCON blew me away. But I would have been satisfied with much less. But after waiting for months we were forced to find something else. And FG has been great.