This is the age of the Third Imperium. In the year 1105, the Emperor Strephon rules over an empire of eleven thousand worlds. On the far reaches of the empire lies the Spinward Marches, the frontier of the Third Imperium. A crossroads for humans and aliens it is a dangerous place, but for those who dare to cross the abyss between stars, fame and fortune waits. And that was the opening paragraph of the handout I created for campaign I ran using the Traveller Adventure. You can download the entire handout from here. It contains a one page summary of the Third Imperium setting, two pages of information on the Aramis subsector, one page on how to decipher the UWP. A trade route maps created using GURPS Far Trader rules. Finally two pages of deck plans for the March Harrier redrawn by me.

The subsector map was a JPG generated by using Galactic one of the best mapping programs for Traveller. It is a dos program but it greatest feature is the ability to easily manage an Imperium worth of maps and data. I have a 75% complete conversion of Galactic into a Windows program which you can download from here. Just grab Galactic 2.3c and unzip it. Then copy my Galactic.exe into the same directory and run. The interface hasn't changed other than the fact it now runs in a regular window and uses notepad as an editor for text files. Like I said it is only 75% complete but but should be adequate for browsing Galactic sectors. Anybody wants the source code just email me. It is written in Visual Basic 6. 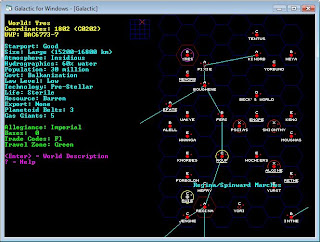 Very nice work...I've been thinking about pulling out my LBB Traveller and running the Traveller Adventure myself. Ah, the memories....

This is great; I never knew Galactic existed. Somehow the fact that it runs in a VGA dos-box makes it feel all the more "Travellery" too :)

I'm tempted to port it to the Mac and iPad.

@Jon, what Galactic basically does is manipulate and displays a hierarchy of files. Each section is relatively simple but there are several distinct sections that make up the Galactic program.

The VB6 source partly breaks up the original source and makes it more explicit what each are and what they do.

The advantage of Galactic's approach is that is very fast even working on a Galaxy worth of data.

Loved both The Traveller Adventure and Galactic. Haven't tried to get it running in a long time (and a few computers) though. Long live the LBB's.