One setting noted for it's detailed mapping of locales is Harn. Unfortunately it is a snapshot in to specific period of time where manorialism was the dominant form of rural organization. Manorialism means that the countryside is divided into dozens of small manors each with a small village of 20 to 50 families attached to the estate. Other time periods had vaguely similar rural organization like the latifundia of Rome and the plantations of the antebellum south.

I pretty much accepted this style for when I do detailed maps for my Majestic Wilderlands. But recently a question by Dwayne of Gamer's Closet got me thinking about this. What would the countryside look like if dominated by farms not manor/estates.

To play around with this idea I drew this base map. Each of the small hexes is 2.5 miles and roughly 3,000 acres in area. The large hexes are 12.5 miles across. The reason I chose this scale is that it take one hour over level terrain to cross one of the small hexes.

Below are the settlements common to both types of rural settlements. There is a castle (solid circle) by the large river and a two keeps (open circle) one on the west side of the map and the other on the east side. The yellowish striped terrain is cropland. The dotted terrain are hills, the green are forested areas with over 50% tree coverage. The light green are woodlands with <50% tree coverage. There are two swamps represent with an off green overlaid with a fill of swamp symbols. 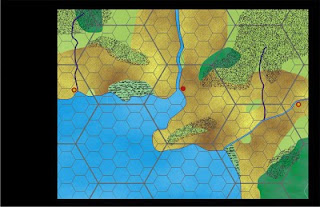 A countryside dominated by manorialism looks like the below. Each diamond represents an manor with 20 to 60 families working 1,800 to 3,000 acres. Roughly one manor per full hex of cropland. Note I omitted the roads here. The two keeps and Castles serve as market centers for the surrounding manor up to 4 to 5 hexes away. Roughly 1/2 day travel. 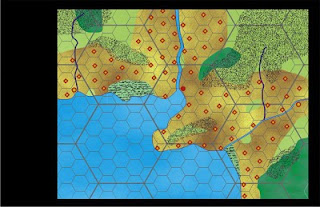 A farmed countryside looks vastly different. There are few distinct settlements. The villages are rather large (think Hommlet size) with probably 80 to 150 families living there. All the farm within a 1/4 day (2 to 3 hexes) travel will use these villages for their day to day market needs. The two keeps and castles will serve as major market probably travelled to once a week.

Each full hex of cropland will have anywhere between 6 to 15 families each owning an individual farm. Farms range from 200 to 500 acres. There are a few large estates with small hamlets of 5 to 20 families likely attached in a sharecropping arrangement. These are marked by the triangles. 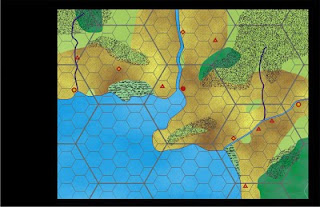 I am intrigued by the farming arrangement as this seem more like the world that the village of Hommlett existed in. A farm oriented setting avoids the grinding grittiness that the medieval manor exemplifies. While I like gritty fantasy it is nice to have an alternative when I need it and still be able to generate the numbers if I want to run a campaign where the players are raising troops.
Posted by Robert Conley at 6:00 AM

How many people are in an average family b your reckoning?

I'm shooting for a middle of the road approach with my current hexmap. Manorialism is breaking down the further you get from centers of power.

average of 5 people per household.

What's the chances of getting one of these in a .svg so those of us trying your Inkscape Tutorial can dissect one?

This one done in Corel Draw I am afraid. I will eventually get some full blown maps out there in SVG format.

First I want to apologize for my bad English.

I know it's very unlikely that anyone read this comment but I could not resist the temptation to congratulate you.

It's the first time I read in an anglo saxon blog someone suggesting that there may be an alternative to the manorial system.

In almost all blogs and publications in the USA and UK manorial system appears as the essence of feudalism in Western Europe. The problem is that this assumption is not correct.

If we understand the manorial system as heir to the villa system of the Late Roman Empire, in which the fief and vassalage are organized through the manor, this system existed especially in England, Germany and parts of France.
In other countries, such as Italy, Spain and Portugal, the feudal system was significantly different.

I do not know much about the Italian situation, but in the Iberian Peninsula a system like the English manorial system would have been nearly impossible.

In this situation of permanent war, one manor was unable to defend himself, and the population was concentrate in villages and towns that grew under the protection of castles or fortified monasteries (sometimes it was the opposite, first appeared the village and then the castle)

There were lords, vassals and fiefs, but there were no manors.

Feudalism existed in the Iberian Peninsula was much more like the farm system you describe in the post that the commonly accepted manorial system.

Thanks Creador for your long comment and for the information about Spain. That will help when I look at alternatives.