The Difficulties of Historical settings

Zach of RPGBlog2 writes about the Rolemaster:Rome supplement. In it he wishes there was more on the geography and the city of Rome while there was great stuff on Roman life. I am not sure what issues the author of Rolemaster:Rome faced in his research. I know from my own attempts that trying to create a historical setting can be frustrating with the materials at hand. Even with the power of the internet somethings are just not readily accessible. Others are filtered through a author's point of view and omit details that would have been useful for a campaign.

But despite this, most DMs who want to run a historical campaign can overcome this by using their knowledge of the period to make stuff up that fits. The point after all is to make something gamable and fun and not be the final word in realism.

To illustrate this lets take S John Ross' Medieval Demographics. Part of the heart of Ross' article is a series of professions with SV values. You divide the population of your target settlement by the SV the result is the number of that type of establishment or professional. Any result less than one can be used as a percentage that will exist.

Very simple, very elegant, plus has the benefit of feeling right to those up on medieval history. However where did it come from?

If we look among Ross' footnotes we find that this section was developed mostly from a table found in the Life in a Medieval City by Joseph and Frances Gies. A book I happened to have.

On Page 236 we find this and see where he got his starting point. 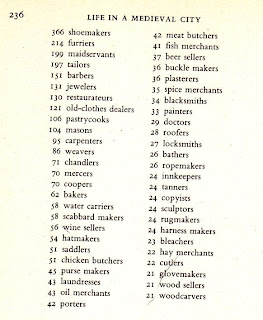 This table is based on a 1292 Paris Tax Roll. By now you notice that the SV value is not the same as what in the table. I think what S John Ross did was divided the numbers above into 55000 and did some rounding.

Notice that the table cuts off at 21 why? Because it turns out the authors omitted any profession that had under 21 professionals.

Putting my Google-fu to work it turns out that this particular document has been transcribed to the internet.

Occupational By-Names in the 1292 Tax Roll of Paris.

As you can see there is a lot more to this list. Most of the distinctions are too fine to be fun or particularly gamable. Do we really want our players to care whether they need to go to an bow & arrow maker or just the bow maker. Most DMs don't. You can now see why there are so many darn Shoe makers in Medieval Demographics. Turns out 1292 Paris had a lot of Cordovan leather shoe makers. 222 guys and 4 ladies. Heck time travelling roleplayers would be set. There are 8 dice makers to choose from.

Hope this illustrates some of the issues of creating historical settings. If you are going to do so there is going to be some editorial choices that you will need to make.

P.S If I figured out S John Ross' math right those dice makers have a SV value of 7,000. (rounded of course).
Posted by Robert Conley at 6:00 AM

Really cool post - Rob. It would be interesting to have a set of cities and towns to compare from. This might be a good fit for a Greyhawk, but maybe not for a rural town.

I bet that the ratios of trades varied depending on locale. If you had some tax data from more rural towns you would probably see a different ratio of trades, supporting the economic demand of the area. Using a larger set of data might allow you to create a table of these values for each group - which would reduce the number of shoemakers and increase the lumberjacks running around in a frontier settlement at the edge of a massive forest ;) Unless the forest was haunted with massive spiders - then you would just have a bunch of dang adventurers!

I'd like to see other cities, also. This is clearly where my DM got his tables -- and explains why there are so many bloody shoemakers around! Even in the hobbit village, there are shoemakers! (That bugs me somewhat.)

thanks for posting this, very usefull!!!

Very interesting points! As the Author of Rolemaster Rome, i can confirm that the published historical information is a mine of misinformation! Roman society itself was so complex and subtle, very difficult for a modern mind to grasp, that i think you have to use a "common sense filter" and use what is good for your game.

I have also written some Maelstrom material (Tudor England) and am currently writing a couple of Anglo-Saxon products, so i know exactly what you mean!

Cool blog Rob, but many of the games run have magic that would influnce these numbers. How do you take the magic effect into these numbers?

Rather than providing a detailed dissertation on the specific lives of historical eras, I think that game books should focus on what they do best. In my opinion, where gamebooks excel is in providing setting-specific games mechanics (such as spells, classes, equipment, etc.) and if it's relevant, perhaps setting-specific changes to take in account the nature of game. (For example, providing info on what Vampires are doing in Rome for Requiem for Rome, or the activities of ancient gods on certain settings.)

Frankly, most historical RPGs try to tilt the other direction in describing mundane details, and then supplying some minor game mechanics to pad out the space. I can't for the life of me figure out why game companies try to compete in a niche that is filled with far too many excellent non-RPG books. For example, I've always relied on the 'Handbook to Life in Ancient Rome' and 'Handbook To Life In Ancient Greece' by Lesley & Roy Adkins for all of my gaming in the Roman and Greek eras. I've yet to find a Greek or Roman era RPG be a better value that either of these books when it comes to historical detail.

What I'd love are historical RPG books that don't focus on historical minutiae, but rather just provide a brief (but accurate) overview for flavor, coupled with a wealth of game mechanics for simulating the era. For those who wish more indepth coverage of the era, then they can turn to the large numbers of professionals that are available in every bookstore in the world.

I find this sentence interesting: "Even with the power of the internet somethings are just not readily accessible."

How much effort goes into research for historical settings? Because for a really first-class product I would expect the author to be liaising with professional historians and visiting museums and libraries.

Smaller supplements obviously can't afford this level of rigour, but effort beyond google is appreciated and adds value.