One of the advantage I am finding with the ritual system is that I can have a greater variety of magic system in my campaign. An example is the The Order of Set which can only cast spells through rituals.

This Order stretches back over five thousand years from the founding of the Thule Empire in the far southern reaches of the Wilderlands. The local hedge magic-users aided the early Thule Emperors in the expansion of the empire. In exchange for their allegiance to Set, the Emperors recognized them as the Order of Set. Since then the Order of Set, Church of Set, and the Emperor stand united as a triad that controls and dominates the Thule Empire.

The Order of Set organizes themselves into Brotherhoods each with a strict hierarchy underneath the leadership of a High Magister. The Brotherhoods function similarly to the Conclaves of the Order of Thoth in that they maintain a building or an estate where they do research and train new Theurgists. The Emperor of Thule appoints at a Grand Magister who is responsible for maintaining standards among the Brotherhoods and to investigate any accusations of disloyalty or treason to the empire. To aid him in this task the Grand Magister has a team of Lord Examiners. Lord Examiners are appointed from the most skilled Theurgists of the Order. Often the next Magister is drawn from their ranks.

The Order of Set is noted for their ability to cast powerful rituals that involve many Theurgists. The Theurgists of the Order of Set have the ability of being able to combine the casting of rituals and spells to produce more powerful effects. Any group of Mages that are in touch range of each other may add their combined levels to increase the power of any level based effect.

A Theurgist must be able to cast the spell in order to contribute his levels. The Theurgist DOES NOT have to have the spell memorized to contribute. Note this touch range may be extended through the use of a magic staff spell. Each Theurgist can cast separate rituals. If two rituals are cast the same round the Theurgist combined level apply to both rituals. This ability does not pertain to spells cast from scrolls, charms, or wands.

At 1st level the Theurgist has completed his apprenticeship and is given the rank of Student. He is expected to adventure until 3rd level at which point he made choose to undergo an Examination of Theurgy. The examination is of the candidate’s knowledge and skill and involves extensive questioning of what candidate learned or researched. These trials are inquisitorial in nature and are designed to weed out weak candidates. A failure results in the candidate dropping back to the middle of the previous level in XP.

If the second examination is failed the candidate is expelled from the Order and forbidden to cast rituals and spells again. The candidate does not have to lose his class but can continue to advance illegally. This is very difficult due to the Order keeping a tight guard on its secrets. The renegade Theurgist will have to do original research for even the more basic of rituals.

At 11th level a Magister’s Trial is held by the Theurgist’s peers. The Trial not only involves another examination but also tests the Theurgist’s skill. The Theurgist will be given one week to prepare an array of rituals, scrolls, charms, and scrolls to take with him. Each Brotherhood has a Maze of Acheron used in Magister’s Trial. The maze is located on a building floor or on the grounds of a Brotherhood estate. The candidate for Magister is shown the entrance. His only task is to make it to the exit and survive. 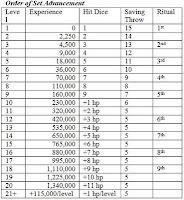