Points of Light 2 Byeond the Sunrise Sea is OUT!

You should now be able to order it through your FLGS and other fine retailers.

Amacui, Empire of Blood. Set in a region where where old evils and bloody empires await.

The Golden Shore, a region in the midst of being colonized from the old world.

The Misty Isles, largely unexplored the riches of the spice lures adventurers of all stripes.

The last is Mazatl the Realm of the Bat God where an evil god of blood dwells in the caldera of a ancient shield volcano.

The same loose background that was used through the first Points of Light is used here. Unlike the first points of Light all the lands are set at the same "time". However they are diverse in geography and locales. It is set during the Grand Kingdom period as depicted in Southlands. For those of you who are interested you will read about what happened to the followers of Sarrath following the civil war that ripped apart the Bright Empire.

The focus is still on being able to just "drop" in a referee's campaign. The map sizes has been expanded by two more columns, all four lands have full maps, and the page count has been increased. All of it dedicated to giving you more locales to throw in the way of your players. Another change is the two word stat block has changed to a 4th edition D&D style. Instead of Orc (1 HD) it is now Orc (Level 1, Minion).

Here are a couple of previews of what you will be getting. 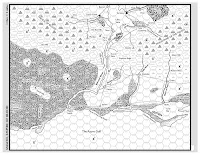 From the Golden Shore

1607 Arent Trading Post
Alec Arent founded Arent Trading Post nearly ten years ago. A minor trading family of the Grand Kingdom, the Arents have labored under the shadow of the great trading houses for decades. With the opening of the Golden Shore, the family saw an opportunity to rival
the greatest trading houses. The Arents invested much of their wealth to outfit an expedition to the Golden Shore. Bypassing Castle Williams and Porttown, they entered into Brachan Bay.
They landed on a light wooded island at the mouth of the Aldarius River, and there they built a wooden keep to act as a trading post and warehouse. The trading post is home to 150 people, all living under the watchful eye of Captain Alec Arent (Ftr5), the Lord Proprietor.

In the past decades, the Arents have built up several trading relationships with both the Ouimos and the Merkaios clans. Alec Arent has sent his sons (Alec II. and Marcus) to live among the clans to learn their culture and language. While the quantities of goods passing between the Akhaioi clans and the Arents are small, trade is growing. In the next decade, Alec plans to send
his eldest, Alec II, into the foothills of the Greyhorn Mountains to make contacts with the eastern clans.
Posted by Robert Conley at 6:00 AM

A cutaway map of a volcano? A thousand blessings on your house, sir.

Is there players maps available for PoL2?

Also, any progress on the Wild North player map? I might be using that setting for an upcoming campaign. ;)

...Disappointed that the jargon has gone 4E since I don't know what any of it means. Wish you would have kept is consitent from PoL1.

@davemage, it wasn't my first choice but the publisher (goodman) had some good points why. As for what they mean the terms should relatively understandable.

@everyone else, the message about players maps has been heard and they are on their way.

Any word from Goodman on when it will be available in PDF? The DCC released this week is already up...

Any idea why Amazon doesn't have it yet? (They seem to be slow getting any Goodman items, it seems.)