On one of the posts I made on social media, Ian Borchardt created a great phrase for how I view magic's effect on the cultures of the Majestic Fantasy Realms.

One of the big problems is that magic in a lot of campaigns tends to be non-scalable, being focused in individuals. Thus I suspect that as a result the effects of magic would tend to cluster tightly, rather than spread through the society. Small islands of wonder in what is otherwise a less developed world (since there would be less incentive for overall development).

Over a decade ago I wrote a post speaking in general about some of issue surrounding magic and society.

There are a lot of dials here you can play with and the results is that many types of settings can result even when they share the same assumptions I am making. By doing this type of exercise you find yourself considering the different possibilities. This is can ultimately to a more interesting and fun game for you and your players.

Since then I done more work detailing my setting both as the Majestic Wilderlands and as the Majestic Fantasy Realms.  Hopefully a brief overview will serve as an example of some of the thing I touch on that post.

One the things I developed is the technology of magic. How was it discovered and how did it developed into its present form as outlined by the system. Currently the Vancian system found in ODnD's 3 LBBs. 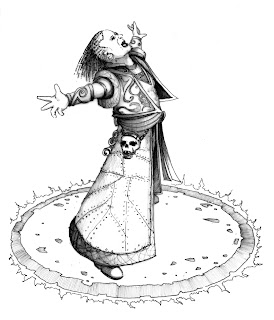 Originally in the Majestic Fantasy Realms level of magic was low, spells could only be cast through laborious 10 minute rituals. The range of spells was similar those found in the 3 LBBs of ODnD. Magic could be found in physical form as viz and that would allow a spell to be cast within seconds. Related spells could be cast quickly if made into a scroll or a magic item.

After the Dawn War, the Demons were imprisoned in the Abyss. Each of the surviving gods created a crystal. Nine of them were used to seal the entrance of the Abyss, and the tenth was the master Chromatic Cystal.

In order to power them, the gods had the crystals channel the ambient magic into their crystalline structure and then release it back out into the world. Creating a self sustaining loop the keep the demon imprisoned. A side effect this that were now flows of magic throughout the world. Concentrated enough to allow magical energy to be gathered quickly and released as a spell within seconds.

The nine crystals "tainted" the flow emerging from them creating nine distinct forms of magic. Each form reflected the personality and powers of the god that created the crystal. These nine forms plus the original ambient magic became known as the Ten Arts of Magic.

Like our world's zodiac, they became associated with specific images and colors. The Claw (Black), The Eagle (Red), The Flame (Orange), The Forge (colorless, original ambient magic), The Hearth (Green), The Lantern (Purple), The Skull (White), The Storm (Indigo), The Tree (Blue), The Web (Yellow).

So what does it means in terms of Swords and Wizardry? I created the following additions*

*Rob's Notes: Ritual only spellcaster are deliberately designed to be weaker than normal vancian style magic-users. The only thing they are better at is that they are able to caster higher level spells at high level as ritual. A normal Magic-User can only learn to cast up to 4th level spells as rituals when they learn to memorize 8th level spells.
**Rob's Notes: In the Majestic Fantasy RPG, I have rewritten some spells for clarity. Functionally they work the same as how they are presented in Swords and Wizardry.
***Rob's Notes: I was reluctant to this. Originally my idea was to have viz or a focus in an art equate to a +1 level caster bonus. A 8th spell caster with a focus in the Art of the Flame would cast fireball with 9d6 instead of 8d6. But it turns out there not many spells like Fireball in Swords and Wizardry, so I went through each spell and gave a small bonus effect if casted with a focus in an art or viz of that type. Usually increase in duration, range, etc.
Part 2
Posted by Robert Conley at 10:16 AM