Construction and Real Estate in a Fantasy Medieval Setting 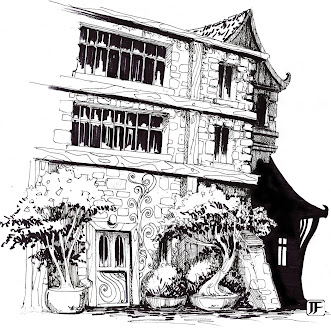 Once the treasure is won where can it be spent? One popular choice is to build or buy a stronghold, whether it is a lonely wilderness outpost, a crossroad inn, or a building in a bustling city state.

If the campaign is set in a city or town, often there isn’t room for new construction. Instead the characters will have to purchase an existing structure or at the very least a vacant lot.

Unlike the modern era, people in medieval and ancient time didn’t generally view the buying and selling of property as a means of profit. While specifics varied between cultures, examples include property viewed as a having a just price (see Thomas Aquinas), or the property was part of a bundle of rights individuals were due in their culture because of tradition, law, or social standing.

For my campaigns, I simplified this. Purchase of property in most cultures of my setting is viewed as an investment made for the income it produced. Not unlike buying a share of stock in a company. The value may go up and down based on larger events, but like a stock it has a specific value that is bought or sold at. Therefore, for these rules the price to buy a stronghold is the same as its construction cost. It reflects its fair price.

This sounds odd to a modern reader. In the modern era, a real estate developer will buy property, hire a contractor for construction and then in turn sell the property at a price higher than what the developer paid.

In the setting I created, there are no real estate developers. Those with the wealth to buy real estate and building would be outraged if somebody tried to sell them land or buildings for more than its fair value.

Instead buildings are built as investments by those who plan to use them. A lord builds a castle as the lynchpin of a domain, a craftsman constructs or renovates a shop on a lot.

When sold, the buyer pays only the actual value of the investment. What society considers at the time its “fair” value. Buying and selling at a profit is reserved for grubby merchants dealing in various commodities or luxuries like grain, spices, silk, or (gasp) magic items. Even then they are only tolerated not praised by the nobles, clergy, and peasants.

Keep in mind that the fair value can rise and fall depending on local conditions. It also varies from its construction price if its use to produce income radically changes.

If there is little difference in cost in buying versus building, why build at all?

First because land and building are viewed as an income producing investment, the market is limited, people of the times are conservative about losing a source of income, and the property was often tied to a bundle of rights reflecting a social station in the culture like a knight’s manor. Loss of the property could mean the loss of one’s social standing. This meant the property you what may not be available at any reasonable price. Hence the need to build. In addition, if you build you also get to tailor the land or building to your specification rather than having to deal with already there.

It is possible to build at a cost lower than its fair value if you control the basic resources that are needed. Namely the right to harvest wood from a forest, and control of a stone quarry. Without needing to pay the market rate for lumber and stone, you can easily build at 75% of the cost or lower.

Not much in the way of mechanics in this post. But thinking about this and doing the research has allowed me to solve a long standing issue in how I run campaign. When PCs want to buy instead of build, what the price? And what the motivation of the NPCs selling the property?

IME the vast majority of times PCs acquire a property, they either cleared out a ruin and claimed it for themselves, or were granted it by the local ruler. Any price paid tends to be pretty nominal.

The idea of real estate developers building castles 'on spec' is pretty amusing! >:)
I think if the PCs were buying property in town I probably would charge well over the construction cost, since you are paying for location-location-location. You can't normally buy a fortress anywhere, but if you were to buy a wilderness fortress it is probably either a monster-filled ruin and/or someone important wants you there, probably to keep monsters at bay. In either case, any price paid will be low.