At work I am doing some important software R&D on a new type of machine. A couple of weeks ago I went to the factory to test out the final version. Now this week I head to Quebec and spend a day to make sure that the installation goes OK.

The weird flights makes flying there versus driving there a wash in terms of my hours spend travelling.  But the flights put my time at the customer's site on a very tight schedule. Since this is a first of it kind machine I elected to drive there.

And along the way I rolled some good ones on the random encounter chart.

The US side of the trip was OK although the drive around Lake Ontario felt it took forever despite beating the Google time estimate. I would have done better but I blew a perception roll at the I-90/I-81 interchange at Syracuse. Going around the eastern side of Syracuse to get back on I-81 North didn't take too long.

After driving through the Thousand Islands it has been placed on my to do list of places to visit more thoroughly. They are not kidding when they say there are a thousand islands.

At the Canadian Border I run into a huge Traffic Snarl. 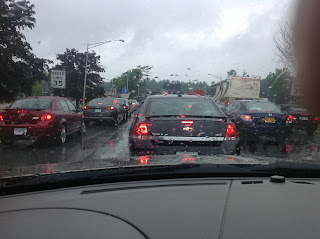 Looking around me I realized that 9 out of 10 cars are from Ontario and then it hit me that I run into all the Canadians returning home after a weekend in the US.

Yeah it was raining the whole damn trip. Although the rain shrouded Thousand Island is an image that will remain in my memory for a long while. Although thing of note was all the rocky outcropping. While PA and other regions has rocky outcropping these were Granite with a capital G. Red, and a bunch of other colors. Dwarves would love it here despite all the water.

So I get through customs and thankfully the paperwork to show Canada that I didn't arrive to steal a job from one of their own. Remember you go there to SETUP your company's machine not to INSTALL your company's machine. And always bring the original purchase order. I wasn't expecting any trouble and despite being nervous at having to pull over and present paperwork everything went smooth and they were very polite and helpful.

So I get on 401 and head east to get to Quebec City. I stop at a ONroute plaza to refuel, get lunch, and to get some Canadian Money. I was advised to use a ATM as all you get socked with is the bank fee. I pull out  my money and stared at whats in my hand. 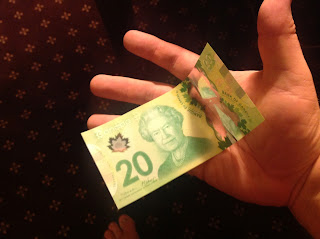 Now Canada is a good friend the United State and if you going to have a really long border with anybody I would pick them. In the past remember people joking about Canada's money looking like play money but their new $20 is like wow. I have to admit that this is something not going to be easily counterfeited

Speaking of the ONroute plaza I had to double check my IPad to make sure something didn't escape. 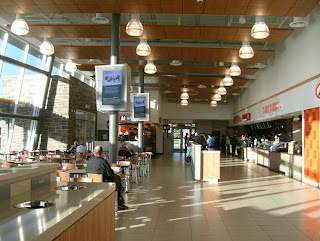 .
Teasing aside it was really well setup and despite the rainy day it was very bright and didn't feel cramped despite all the people.

The drive to my first major waypoint Montreal was very scenic. Definitely an area of Ontario worth visiting later. Then when I got into Quebec all the signs became french only. No problem I will just follow the number. Yup 20 to 540 to 40 that will do the trick.

540->30 with some french underneath it. Oh crap! What the hell I am supposed to do? I elect to stay on 20 despite it changing from a interstate a two lane highway for a couple of miles. I just followed the numbers and got back on 20. No problem I will just drive through Montreal and come out the other side and be on my way to Quebec City.

Then I run into the Turcot Interchange. 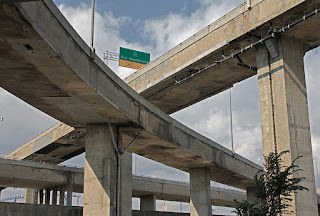 The above picture doesn't begin to describe how terrifying and messy thing is. And the picture is in bright sunshine and I was driving through it in pouring rain!. To boot my connection to 20 East was BLOCKED! The detour lead me through the interchange, had me turn around and I had to go back through it a second time!

The section on crumbling concrete in wikipedia article doesn't begin how freaking bad it looks when you are actually attempting to drive through the thing. I will move heaven and earth to avoid this coming back to PA.

So finally I am beyond Montreal and on my way to Quebec City. About halfway there I need fuel. See a really nice rest stop and pull in. It is jammed with cars getting refueled. We are talking four to five cars deep at each pump. I look at the gas prices. It is 1.27 per liters. Mmmm that what I paid for back at the Apple looking plaza. I figure it was a some weird rush hour thing. So I go in and eat.

I come out and it is still four to five car deep and more are coming in. And this is a rural place like in the middle of PA, western New York, Farmbelt Midwest.  Later I asked my hotel desk clerk and apparently gas is normally $1.37 and that even a 10 cent difference can ignite people flocking to the pump for "cheap" gas.

Getting to Quebec City was a bit of anti-climax after all that couldn't be smoother getting into the city, finding the hotel, and checking in.

Finally I know it sounds like I making out Canada to be this weird off the wall place. I feel it just the dice rolls on this particular trip. I been here multiple times in Ontario and Quebec. Both for gaming and for business and always wind up meeting some really nice folks.

In other news I will be putting up posts later this week about my family's visit to the Origins Game Fair and the final post on the status of the Nomar Campaign.

Sounds like you were using that damn Harn weather chart again. Nothing good happens when you use it.

Quebec city is where I grew up. Not a bad time of year to be there if you can spare some time wondering downtown.

I for one would like to apologize for my province cthulhu-inspired falling roadways. on the bright side at least you didn't roll a hostile moose encounter!

1864 Islands actually, to be considered an island it must be above water all year and have at least 1 tree growing on it. If you take one of the boat tours they will show you the smallest island (Tom Thumb Island, I think) it has a tree and is about 6 square feet.

That translucent strip in the Canadian money is kinda cool.

Glad you still liked your trip. Also, sorry you had to see that Turcot exchange, and it's been years we are having problems with it. Also, you might try to stay on highway 40 to go to Quebec. Google says it's longer, but there's usually less chance of monstrous jams.

You also missed another perception check: the road quality change drastically as soon as you cross the ontario/canada border, around 25 miles before Montreal... unless our gouvernement rolled a 20 on it's disguise check

I totally second what Christian said above -- if you get a chance to just wander around downtown in Quebec city, it's a great place to visit.

Sounds like quite and adventuresome drive, though. Hope you manage to avoid that interchange on the way back.

And this is the first time I've seen that strip on the Canadian money -- wild!

It wouldn't be a trip to Montreal if you didn't get turned around. I live in Ottawa and go there regularly (once a year or so) and I swear I've never not got lost at least once per trip. It's the most confusing city I know, but it's also one of the coolest. The culture, the food, it's great. Getting lost is a small price to pay. :)