Since the Summer of 2010 I been using NBOS's The Keep to keep track of notes for the various campaigns I been involved with. At a minimum I record the date and whose campaign it was. I generally not that great at keeping detailed notes but  between what I put in the Keep and my prep notes I am finding I can track the course of a campaign much easier than the past.

I figure that writing up a post about it would help to give a look into how my sandbox campaigns go and give a sense of it's ebb and flow. You will have to click on the below image to see the keep and route marker. I give the real world dates and in-game dates for each Entry. 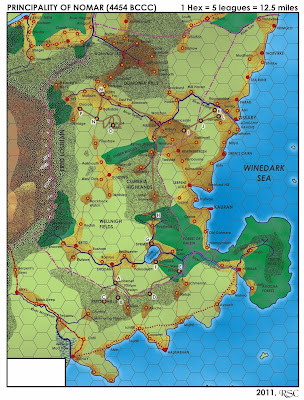 The campaign takes place in Nomar, a Ghinorian Realm with many elements similar to the mythos of King Arthur. It is ruled by Prince Artos of Dorn who tries to unite his facetious nobles in the faces of the Skandian Vikings to the east and the threat of City-State's Lord Divolic to the south.

The cast of Characters (created with GURPS)
Delvin - a dwarven fighter from Thunderhold wandering human lands to seek his fortune.
Durgo - a forester from southern Nomar who left his home and village under bad circum
Sir Cei Kerac - a hedge knight hiring on as a mercenary to regain the fortune he lost gambling
Aeron - a ordinary common man with special skills
Kermit - a half Viridian (demon), half Karian (Japanese) magic using puppeteer.
Sir Henry Kiefer - a young knight seeking to regain the manor that is rightfully his.
Brom - A Warrior seeking his fortune.

A) Abberset (7/23/12) (Portly Pomp 3, 4460 BCCC)
The party joins the Red Hawk mercenary band under the command of Sir Jonas Hawkwood in the service of the Count of Shodan. The Count is paranoid about the intention of Duke Divolic of City-State to the south and has hire mercenaries to patrol out of Abberset Keep.

The party spends the day learning about Abberset Keep and its inhabitants.

Party ambushes one of Divolic's Patrols. Much debate whether they are over the border or not. Returns to Abberset and finds out Captain Hawkwood and the Count's Baliff don't really care. They get their first payday when they get their share of the looted armor and weapons.

Heads back out on Patrol

C) Estoil Hills (8/6/12, 8/13/12) (Portly Pomp 5th to 7th, 4460 BCCC)
Finds a camp of Halkmenan refugees (fleeing from Duke Divolic) destroy, find one of Divolic's patrols destoryed, and almost get killed themselves by the Hounds of Hamakhis. Finally figures out that the Hounds are spirits of vengance released when one of Divolic's patrols slaughtered an entire refugee camp. Were able dispel the hounds by burying the desecrated remains of the refugees.

A) Abberset (8/20/12, 9/10/12) (Portly Pomp 7th to 8th, 4460 BCCC)
Group returns to Abberset. Aeron finds a Skandian spy learns that Divolic is doing something to the east that involves something that will badly effect the Skandians. The spy is taken out by the party at the Mud Frog Inn. Sir Henry and Durgo joins a hunt with Captain Hawkwood and the Count's Baliff. An owlbear is killed. Sir Cei rides north to see Sir Mordran of the Brotherhood of the Wyrm and pledges his service. Kermit entertains the keep with a popular puppet show. Delvin finds a map of the wandering of  Master Vanal a famed Dwarven explorer and possible treasure in the eastern Estoil Hills.

D) Estoil Hills (9/17/12, 10/8/12, 10/15/12) (Portly Pomp 8th to 12th, 4460 BCCC)
The party follows the map in the Estoil Hills and find a entrance way into a dungeon. Exploring it they find it is a ancient demon stronghold left over from the Uttermost War. Partially functioning they were able to find treasure, and defeat the creatures inside. Among one of the stranger things was a room that used different configurations of crystals to create potions in its pools.

D) Estoil Hills (10/22/12) (Portly Pomp 13th, 4460 BCCC)
Sir Cei convinces the party that with the treasure they found in the dungeon that they can buy off their contract. That they would have better luck with the Brotherhood of the Wyrm and fighting Skandian Vikings. After some debate the party agree and heads north.

Notes,
One thing you will notice that only 10 days passes in-game in 11 game sessions. Something about the way I handle things causes my players to want to play out nearly every day. They are all busy doing interesting stuff so it isn't a result of micro-management mechanics.

Another thing is that the various session set in Abberset had a lot of split party stuff as they scatter around time. What I do to handle this is use a round robin technique. I go to each player and roleplay with them until a natural break comes up and move onto the next player. For example leaving a shop or finishing a conversation would be a natural break. So each player or smaller group gets a 5 to 10 minute chunk of roleplaying.

Delvin: "Notice how I always find the map or item that leads to the demon."