Scourge of the Demon Wolf is Released


Three died. They were mauled beyond recognition. The Baron sent his huntsmen to kill the beasts and for a fortnight they tramped across the countryside. Between their whoring and drinking they killed twelve wolves, parading their skins through the village. They were hung on poles as trophies of victory. Then the huntsmen left, the beasts slain, the village saved… so we thought.

With the priest's help I wrote a report to our liege, the Baron of Westtower. My report ended with,

A 72 page adventure compatible with the Swords and Wizardry rules and a setting supplement to the Majestic Wilderlands. detailing a small barony, a complete fantasy village, a conclave of mages, a crossroads hamlet, and a camp of wandering beggars. 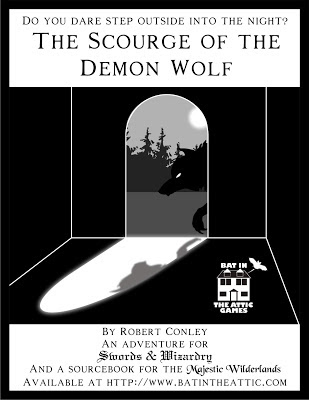 Posted by Robert Conley at 3:46 PM

Why two to three weeks on the print option for RPGNow? Quite simply the b/w format didn't have the quality I wanted. And when I setup this i September it all I had for a reasonable price. Since then the standard color option was released and there is only a .20 cent difference in cost.

The Lulu version used their standard print option, because of the low page count, and the map and illustrations look great. This is wasn't the case with the publisher grade option used for the Majestic Wilderlands Supplement.

Rather than push out an inferior product .20 more in profit I opted to wait a bit and release the RPGNow as standard color so I can get a better quality book out. Of course this means I have to wait for another proof copy to arrive.

The heart of the problem with Lulu's publisher grade and RPGNow b/w is that they really can only print two colors. This means that grays have to be dithered. The grayscale is replace with dot patterns of different densities. Which also breaks up the fine lines of my map symbols unless they are perfectly black. And even then without anti-alias they look a lot worth than an image with a full grayscale range.

The upshot of all this is that in the future color books on RPGNow are about to get drastically cheaper for certain projects. You probably still want to use premium color on books loaded with full page artwork but if you have maps with spots of color, simple color graphics, etc now there is little difference between going b/w versus standard color.﻿
Collapse this comment

Do you have any plans to let folks buy thehardcopy and the PDF together at a discount?

His original version of this post had the PDF included with the RPGNow printed copy.