We completed three sessions of the campaign with the fourth session set for tonight. 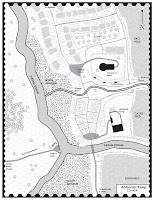 The game is based around the town and keep of Abberset on the southern frontier of the Principality of Nomar.  Abberset is part of the domain of the Count Salian Crompton of Shodan. Count Salian is concerned over the rising power of Duke Divolic of City-State who conquered the Halkemenan city-states to the south of Nomar.

At first the Ghinorians of Nomar, devout followers of Mitra, the Goddess of Honor and Jusice, felt the Halkemenans had it coming to them as they were notorious for being death cultists of Hamakhis, God of the Death. But Divolic being a Myrmidon of Set is no friend of the Ghinorians and Mitra. And now many nobles are worried he beginning to view Nomar as his next conquest. Count Salian more than most.

He has hired a number of mercenary companies including the Red Hawks under Captain Jonas Hawkwood. The campaign started with the characters' first day with the Red Hawks.

Most of the first sessions was spent exploring Abberset and learning about the Red Hawks. I am trying to play it like a medieval mercenary company which means discipline is pretty loose in some area and very harsh in others. Captain Hawkwood informed the players that there are only a few simple rules they need to follow.

They also met their sergeant and his corporal;   Sergeant Raedric and Corporal Octa. They also met Corporal Tunfa, a very rotund man who promised the two hedge knights that he was "A man who can get anything they desired".

The party spent a game day exploring Abberset, they met Elder Drogon and his acolyte Ned. The party cleaned him out of bless amulets. In GURPS amulets cast with a level 1 bless are very inexpensive (25d or $100) and confer a +1 bonus on all rolls. If something "bad" happened, like a crippled limb", the amulet will nullify the results (convert it to normal damage) and the magic will dissipate. Interestedly Durgo bought a bless amulet for his dog Red and attached it to his dog's collar.

The next game day the party got their first assignment, to check out a quarry to the west and see why a supply wagon hasn't returned yet.  A half day's journey away they crossed Vikram Stream on the ferry and headed up the trail. About an hour out from the quarry they spotted a naked man wandering around.  It turned out he was a miner and half-crazed from something that happened at the quarry.  Delvin the Dwarf took him out in one shot with the flat of his axe blade and tied him onto the mule.

When the party arrived at the quarry they found all the miners dead, half torn apart by wild animals. At first they thought the creature was in the Miner's Lodge but it turned out to be just a wild bear. Cei took out with a shot from his Knight Killer crossbow.

Drogo tried following the track but they disappeared into the stream. However when searching the banks he found some other tracks of a man on horseback along with several men on foot. Careful examination of the horseshoe prints found that they were probably made in City-State.


Session Two
This began with the party following the tracks. Meanwhile Henry Kiefer arrived in Abberset and signed up with the Red Hawks. He was told to head to the quarry and join up with the group. Meanwhile the rest of the party stumbled across several men in the middle of the forest who were hanged. Looking over their gear the group found that they were poorly equipped warriors from Halkemenan. Aeron points out they were likely outlaws rebelling against Duke Divolic. Shortly before leaving, Henry Kiefer manages to catch up to the party.

Durgo looks at the tracks again and determines that they camped here for a while before continuing, likely the party will be able to catch up to them before dark. After riding for a few more hours the party found the group camping near a ruined barn. It appeared to a Knight of Set and men from City-State.  Cei tried to parley but Henry Keifer was having none of and plugged the knight with a bolt from a knight-killer crossbow. The knight fell and the fight was on.  The party won and the surviving City-State warriors were their prisoners. They also found two Halkmenan Outlaws tied up apparently prisoners of the Knight of Set. So they set camp for the night.

Then in the middle of the night the party was attacked by four wild dogs. However these dogs were able to phase in an out and had a deadly breath of code. (see Barghest from GURPS Natural Encyclopedia). The players got lucky were able to take out two at once, the third one was dispatched within a few rounds, and the fourth one killed several of the prisoners before being killed. From the Halkmenan Rebels they found out that these were Hounds of Hamakhis sent by the death god to wreck vengeance for some great wrong.
Session Two Ends.

You can download the Roster of Session 2. It has combat stat block for the Barghest as well as the stats for the Black Bear, and the Knight of Set warband. One reason the party won the fight with the warband so easily despite being 75 point characters was the fact Henry Keifer was on horseback. Without an opposing knight on horseback he dominated the fight.

Durgo and Aeron being hidden and launching surprise attacks helped a lot. Cei took a bad hit from a spear but was able to recover and take out the remaining men-at-arms, cutting one of their arms off. Unfortunately Kermit started too far out and by the time he was able to close in with his spells the fight was mostly over.

Session Three
This session didn't have a lot of fighting and was a bit confusing for the players as they had to sort out the deal with the  House of Hamakhis, the Halkemenan Rebels, and the Knight of Set's warband. After a debate the party decided to head back to Abberset.

Durgo, Cei, and Henry practiced their lance skills by tilting at rings. They really sucked due to the size modifier of the ring and the speed of the mount until they figured there is no reason why they can do a all-attack get a +4 to hit bonus. Then they only kind of sucked. Afterwards they went to the Laughing Fox and had dinner and drink. During the dinner Cei's chair broke underneath him.

I rolled, Step and trip over a pothole, for a random encounter. So since they were in the tavern I rolled to see which character had a chair break underneath them.

Captain Hawkwood summoned Aeron to a meeting with Elder Drogon and the Bailiff of Abberset, Sir William. Then Aeron went and talked to his contacts about the situation with the Halkmenan Rebels and anything about Hamakhis he could find.

Kermit when to the temple to see Elder Drogon, Bumped into a really drunk villager along the way. The villager saw Kermit check himself to see if anything was stolen and started following him shouting "I didn't steal anything of yours. Please don't turn me in. I didn't steal anything. Kermit handled the situation pretty well except for an unfortunate choices of words with Acolyte Ned that left the boy with the impression that he was going to enchant the drunk villager to leave him alone.

The session ended with the party interrogating both the City-State prisoners and the rebel prisoners. Cei was adamant that they should kill the rebels as trespassers on the baron's lands. While Aeron was pointing out that they were fighting against Divolic who is no friend of Nomar.  The party wasn't sure what to make of the Hounds of Hamakhis. Half believe that the rebel summoned them and let them loose to attack anybody and anything. Half believed that Divolic men did something to cause them to be set loose.

The session ended with the party being ordered back out to the quarry to deal with the Hounds so the site can be reoccupied.

The group asked for a map and a write up of what the prisoners said so they can keep track of what going on. So I drew up the following map. I chose a hand drawn style to make it more of in-game map. 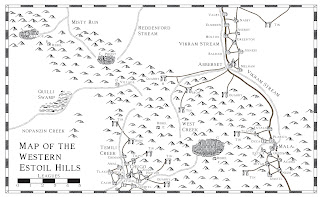 And I made this handout for the group.
Posted by Robert Conley at 7:00 AM

I'm looking forward to more of these, and I'm very jealous that you're playing more than I am at the moment.

I am enjoying my first GURPS experience, although I was bummed I had to miss sessions 2 & 3 due to work commitments (you'd think there would be more flexibility when it comes to gaming).

On the one hand, when it comes to GURPS, Fantasy Grounds II makes a big difference, as it does all the computations. This makes the game fast and easy, but I am finding that I am not developing an intuitive sense of the rules or remembering all of my charcter's details. This put me at a disadvantage when my computer decided to not play nice with Fantasy Grounds II during our last session.

"This put me at a disadvantage when my computer decided to not play nice with Fantasy Grounds II during our last session."

I defiantly can understand how you feel on that. The designing of the gurps 4enhanced ruleset was mainly designed with the idea of smoothing out the online gaming experience, without over automating allowing the players to feel more like they are at the table top than a vtt. However features can feel like a crutch if you are not an experienced gurps GM.