This past weekend Kelly Anne, myself and our kids went to Washington DC for a minivacation with my sister. We visited the Capitol, recommend the congressional staff led tour, the Cherry Trees, and the Museum of Natural History (very big place). A good time was had by all. The most memorable moment came when we were in a grove of Cherry Trees. The weather was great and just about everybody in Washington was wandering the Mall area or lounging around the grass. We stopped and just laid back enjoying the sunshine and the scents. Soon my youngest, Gregory, started collecting sticks. Not just any sticks but sticks that were natural smooth and "interesting" as he puts it. Then he went to Kelly Anne and asked to her make a sign labeled Wand Shop. And he laid out all his sticks in the grass and propped up the sign. After a few minutes he didn't haven anybody interested or walking by. I told him location is everything and you need to find the right spot with people traffic. So he went over a few yards to a foot path and laid out his wares. 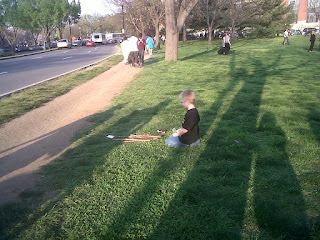 Within a few minutes he was talking to people and giving away his wands. And unbelievably he actually managed to sell two of them for a buck each. Not bad for a eight year old. Later he tried to drum up more business by having Kelly Anne add "Magic Powers included." It was pretty cool to watch and a fun time was had by all for him and his customers. Here is Gregory holding up his two dollars in triumph! 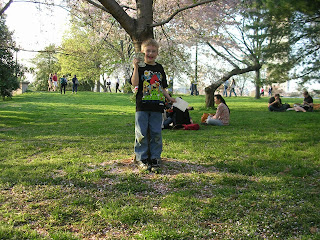 I think you need to turn in your grognard card.... you should have lectured him about how magic items are very rare and there should never be enough to start a magic store!

I jest... a fun story and sounds like a nice outing.