Origin of the name Majestic Wilderlands

When I first started working on Judges Guild project with Bob Bledsaw around 2000 I kept calling the Wilderlands, the Majestic Wilderlands. Bob didn't know what I was talking about even tho I was 100% sure that was the overall name. Eventually under Necromancer it just became the Wilderlands of High Fantasy.

Still I wondered for a long time why was I sure it was called the Majestic Wilderlands. Now I found my answer which is on page 17 of Pegasus #8. There is an article giving a overview of various Judges Guild Product and at the end there is a list of project they are working on.

One of which was 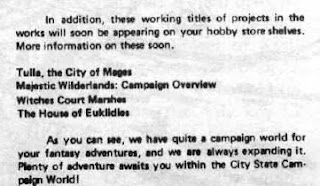 Love, love, love this information. we can only wonder at what these unrealized projects would have looked like. "City of the Mages"? Any data on that?

Can you tell us more of how Bob's vision differed and what his notes looked like?

Rob, I'm also very much interested in more information about the Wilderland's and Bob's vision.

Started following you, too. I've blogged a bit on JG stuff and would welcome your thoughts.