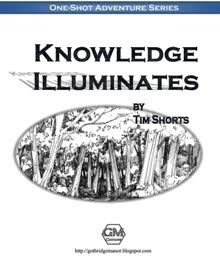 My friend, Tim of Gothridge Manor, has thrown his hat into the publishing ring with the release of Knowledge Illuminates.

It is a small one level dungeon that requires both thinking and hacking. Tim first ran Dwayne of Gamer's Closet and myself through this several years ago at the start of one of Tim's fantasy campaigns. I remember commenting that this felt like a classic dungeon where not only we had to fight but think our way through many of the rooms.

Up to that point our fantasy campaigns were heavy on politics and conflict between different groups in society. Knowledge Illuminates forced to relearn skills that we haven't used in years and it was a blast. The ensuing campaign was great and this dungeon got it off to a great start.

Remember like so many dungeons in our campaigns (Tim, Dwayne, and myself) the real prize isn't the treasure you get but the dungeon itself. It made a great base for us for much of that campaign.

Note that I did the maps both an area map and the dungeon map. The module is written for Swords & Wizardry Core Rules and usable with all older editions of the world's most popular roleplaying game.
Posted by Robert Conley at 6:00 AM

Thanks for the shout out Rob. The maps are fantastic and thanks again for the help.

I just downloaded my copy. Nice job on the maps, Rob.

So this is probably going to be a stupid question, but I have to ask it. I don't remember exactly how I found your blog, but the google search had "Meadville RPG" in it. I've been living in Meadville PA for almost 5 years noe, and I haven't gamed since before my son came along 9 years ago.

The simple (yet stupid) question is are you from Meadville? If so, do you have a group you play with? Sorry for being blunt, but I miss the "old days"

I also play at the Gold Star Anime monthly and there is a game coming up Saturday at 4:00pm.

my email is robert s conley at gmail dot com. Just put together all the work and make the correct substitution.

Nice of you to post this, Rob. Thanks for all the support you give Tim.