From the Attic: The Majestic Wilderlands: The Tharian Coast 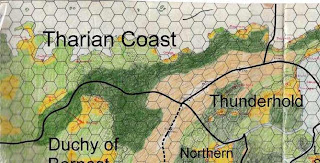 During the Great Viridian the clan lords of the coast were among the many Tharians who swore fealty to Halius as Overlord of All Tharians. However when Halius died after the war was over, they along with the clans of the Duchy of Bernost, refused to swear to Lucius.

Lucius journeyed to the ancestral shrines of the Tharians in Thygamus and received a prophecy.
Assume the titles of your father and become Overlord of all Tharians. You are granted all the lands where Tharians dwell save for those lands given to the protectors of this shrine.

With prophecy in hand Lucius declared the clans outlaw and waged open war. He was successful in defeating the clans of Bernost. Facing imminent conquest the eight clans of the coast send an emissary to the City-State Sotur pleading for aid. The High Council of Sotur pledged aid along with support from the Merchant League of the Pokrantils. With the aid of Sotur and the League the clans of the coast were able to resist the forces of the Overlord Lucius. After several seasons of fruitless efforts Lucius agree to a truce while not conceding his claims.

In the hundred years since, the three Overlords that succeeded Lucius has continued to maintain their claim over the coastal clans. While open war has not broken out raids and counter raids occur several times during each decade.

War and conflicts has always been an important part of my campaigns. My current system relies on a combination of GURPS Mass Combat and a patische of various information found in the Harn Supplements particularly Battlelust and Shorkyne.

This is what a worksheet looks like when I do prep for a military campaign.

What I do is try to compute Knights Equivalents. A Knight Equivalent is a basic package of 5 men; A Knight (Heavy Horse), His Squire (Medium Horse), and 3 footmen (various). Generally 1,500 acres is enough to support 1 Knight's Equivalent. Then I break it down into availability by season, and breakout the different troop types. Finally the wage and support costs in silver pennies. 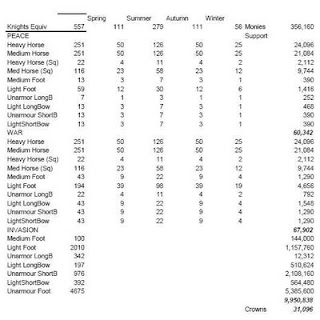 This is a shorter version of the above where I am looking at the aggregate strength of the six of the eight coastal clans. Orlage and Maskholm are not included because they are effectively isolated from the rest of the coast. 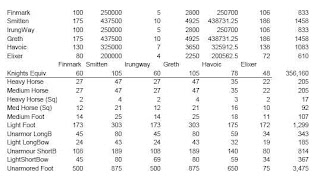 With these figures in hand I can translate them in the Troop Strength numbers needed for GURPS Mass Combat and run any battles that are needed.

While originally based on Harn figures, I have since read enough of the original source material and done enough original work that I can turn this into a standlone product. While obviously I can't use GURPS Mass Combat I think I worked out a way to do some similar using the Original D&D rules. Of course if you want to be a real grognard you could use Chainmail or my all time favorite 1st edition Battlesystem. I really wish I had a PDF of this instead of the 2nd edition Battlesystem

Another interesting tidbit is that Sotur was traditionally the city-state in which I use one of the TSR's monster cities. The first to occupy this spot was Lankhmar then later Waterdeep. I did this because I viewed the Elphand Lands and rest of the Northeast of my Majestic Wilderlands as traditional D&D land. Waterdeep was an especially good fit for this.

To me traditional D&D land is a place where you had all kinds of races working together against various "bad" guys. That a lot of their successes came about from the actions of Adventuring parties trying to do the right thing. In the northeast when a village got in trouble they would almost expect some adventurer to show up in the nick of time to save the day.

To the rest of the Wilderlands viewed the Waterdhavian and the rest of the north as a bunch of meddling do-gooders. Often causing as much damage as they fixed. The sheer power of some of the northern adventuring parties keep many of the bordering nobles up at night.

For the most part this works for the northerners. Because of the heavy influence of the elves their culture is much more laid back as far as social conventions. Nobles are not part of the justice system. They are estate administrators and military leaders. Justice is handled by a separate group called the Trehaen (druids). Rouge adventurers are a problem but it is usually solved by, you guessed right, yet another adventuring party showing up and saving the day.
Posted by Robert Conley at 6:00 AM

I actually do have a PDF of 1e Battlesystem. Hit me up at dlarkins78[at]gmail[dot]com with your email address and I'll send it to you.

I've picked up a few mass combat systems for 3.x. I can see you guys are going to force me to dust off my old 1e Battlesystems and give it another look.