From the Attic: The Majestic Wilderlands Part 1 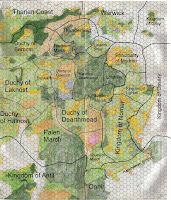 I talked a lot about a variety of role-playing topics. From time to time I mention the Majestic Wilderlands my home brew campaign that based on the Wilderlands of 20 years. I figure you guys would like a little more in depth look at it.

The above map is the core region where 80% of the campaign I ran were set. The map is hand drawn in 1989 which was copied from another hand drawn map done in 1986 (it got worn). It lasted because I had it laminated. You can see that the folds have gotten quite worn even tho I store it rolled up.

The map is 12.5 miles per hex. I boosted the scale after everyone thought that a journey from City-State to Viridstan should have taken a lot longer. The expanded scale let to an interesting consequence of where players never really ventured out side of this map.

The original Wilderlands Settlements were redesigned as the core of a larger set of village. Surrounding each settlement are 6 to 10 agricultural villages, manors, and hamlets. The yellow areas represent cultivated areas.

I will give a brief synopsis of the background of various regions in the next post.
Posted by Robert Conley at 6:00 AM