Tim is promoting the upcoming Erie Days of Gaming on the weekend of October 21st. It is a nice local convention that I been attending for a number of years. For many of you it is well positioned between Cleveland, Buffalo,and Pittsburgh about two hours drive from each city. The vendor vary but most years there been a good selection.

I plan to be there and try to run at least two games and maybe a third. One will be a Swords & Wizardry game plus Majestic Wilderlands focused on playtesting one of my modules. The next will be a Traveller game using either Classic Traveller or Mongoose Traveller. Likely it will be a Third Imperium scenario. For the third game I am still deciding between GURPS, DCC RPG, or Hackmaster Basic. I will post teasers later in August.

Hope to see many of you there. 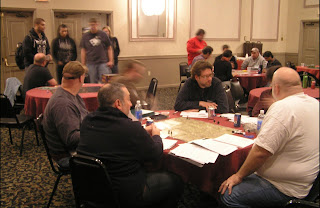 Greg ducking as Jason's Elven Wizard is about to be killed by a door in the DCC RPG. Tim looks away in horror, Al stares at me in disbelief, and John is eclipsed by me (sorry about that).
Posted by Robert Conley at 6:00 AM

I couldn't roll to save my life that day, literally. Also galling: everyone but me made their Save vs. Identification in this pic.

Actually they just failed I went and found the playtest report and updated the caption. :D

I am 99% sure that I can attend this, and I'll probably be bringing my longtime gaming buddy of 20 years with me, making a day of it, coming all the way from Canton OH.

I couldn't roll either that day. Although Jason's mage being killed by the door before we even got started was pretty cool.