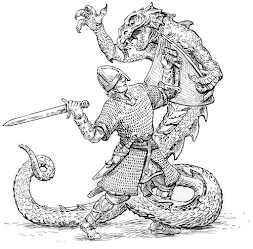 Inspired by the classic edition rule where a fighter gets one attack per level when attacking 1 HD or lower foes (or in ADnD lower than 1 HD starting at 1-1 HD). I came up with the following rule for my Majestic Fantasy RPG.

Can use a melee weapon to attack a number of creatures with a total hit dice equal to the Fighter’s level. There is always a minimum of one attack allowed. If the creature has a modifier to their hit dice, round up to the nearest whole number. For example, a giant fire beetle has HD 1+3; treat this the same as a creature with HD 2.

In addition, Fighters are allowed to add their to-hit bonus (or the difference between hitting AC 0 at 1st level and their current chance of hitting AC 0) to the initiative die roll.

The conjunction of the two has given fighting in my Majestic Fantasy campaign a much welcome boost in effectiveness without being overpowered in the way the ADnD multiple attacks and Unearthed Arcana options are.

One thing I did think of when I wrote the basic rules was writing about how I applied the multiple attack rule during play.

One thing learned from my career writing software for metal cutting machines is that folks find division harder. While I can do division pretty fast, I do subtraction even faster. So the way I apply the multiple attack rule is as follows.

Since I need to know monster hit dice (or character level) anyway to resolve their attacks, it doesn't require me to come up with any more information than what is already there. Because it involves subtraction it is easy to keep track of the total.  Because the totals are small (for example 5 HD worth of attacks at the 5th level) it doesn't take many steps to resolve in most cases.
The times where it is most decisive is when you have a leader type and a bunch of minions. This rule allows the fighter to attack the leader, but also takes out one or two of the adjacent minions.
Monsters
I haven't applied these rules to monsters despite the multiple attack rule on page 5 of Monsters and Treasures from the original rules. I feel that this was in part superseded by the grant of multiple attacks in the Greyhawk supplement to various monsters.

However after a recent playtest of my Deceits of the Russet Lord adventure, I may add this as an explicit ability to certain monsters. For example, a Sidhe Lord with 10 hit dice would be able to target 10 HD worth of creatures or characters. But I would stick with the traditional three attacks that an Owlbear would get.

The cutoff would be if the monster hit dice is in part a reflection of skill as opposed to instinct, I would add this to the monster. NPCs are already taken care of as in the Majestic Fantasy RPG they are leveled characters.
Posted by Robert Conley at 11:01 AM

I still swear by a simple cleave rule for fighter classes. If they kill a foe they get another attack and can move 5 ft. They can do this a number of times equal to their level. Simple and effective without being overpowered. That, plus some additional damage for fighter types as they level (basically +1 per 3 lvls), gives fighter them the boost in the arm they need without slowing down combat too much.

I do the same for monsters by HD. It makes monsters rightfully scary to low level PCs or normal troops.

I prefer jojo's method. It's simpler and doesn't involve a division work-around which is admittedly simpler to do than explain.

Unlikely, but would be epic!

Isn't this version vastly more powerful than the AD&D method? In AD&D a 10th level fighter would get 10 attacks vs. goblins and 3 attacks per 2 rounds vs. everything else. In this system he'd get 10 attacks vs. orcs, 5 vs. a fire beetle, 2 vs. bugbears, etc. Also, he'd get +9(!) to initiative. Am I misunderstanding your system?

@Corathon, I observed the following.

1) It does make the Fighter far more effective against lower-level/HD opponents. In practice, it has meant that high-level fighters are able to hold their own alongside similarly leveled magic-users and clerics who have access to spells capable of wiping out mobs of low-level/HD opponents.

2) The initiative bonus means that fighters are generally going first however keep in mind this is coupled with the monsters getting an initiative bonus equal to 1/2 of their HD rounded down. So a 10 HD monster will have +5 to initiative.

3) I do have a higher attribute bonus than Swords & Wizardry RAW. However not has high as AD&D. Mine max out at +3. I experimented with the AD&D method and the D20 Method doing +1 per 3 attribute points has the right feel.

4) Other elements of Swords & Wizardry have been preserved like the low hit point totals and other elements.

I've used this method for a while with the caveat that the fighter can only attack a given foe once and that the highest HD foes who can attack the fighter count against their total attacks, since the fighter has to focus more attention on them. So, for example, a 7th level fighter could theoretically attack 7 orcs (as long as he could reach all of them with a 5' step), but the instant that 4+1 HD ogre (effectively 5 HD) comes in range, the fighter can attack only 3 times per round.

Yeah, there's a little math involved, but not so much as to be difficult.

I always had issue with the AD&D rule - not for balance, but verisimilitude: it didn't make sense why a level 10 Fighter could strike simultaneously, a whirlwind of blades, against a squadron of skeletons, but the suddenly was no better than his 1st level squire when confronted by a zone of zombies. This is an elegant way of scaling the ability up without violating the spirit of the rule: which I always felt lay in wilderness encounter entries with potential hundreds of foes.

Well played. Thank you for posting.

@CWR, Appreciate the compliment and that you found it useful