I always been a fan of the Hero System and Champions. While I moved on to other system for fantasy roleplaying it is still my goto RPG for super hero campaigns. I am starting up a campaign for some friends who are interested in playing some super heroes. One of the things I used in past campaigns is a form from Champions II from way back in the 80s to track PCs and NPCs in combat.

However it has issues where that it doesn't have many lines for characters and splits the information for a character into different sections. I used to use the one in Fantasy Hero but it small. So I made a new one. 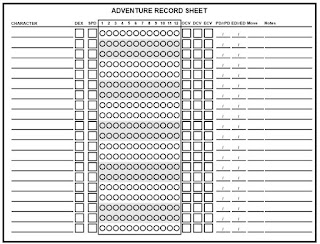 Posted by Robert Conley at 7:33 PM

Hero is a great system, extremely customizable to support any setting or style of play. The main issue with it is just getting characters made.

People always complain about the math, but it's really just arithmetic. Not that complicated. And it only comes up in the "behind the scenes" part of the game anyway - chargen and spending XP. Gameplay is generally pretty quick and easy.

There are a lot of numbers for the GM to juggle, though, so this sheet is a great tool.

I do have a minor quibble, though. There's no attribution. If I'm running a game with this sheet out and another potential GM sees it and wants it, there's no easy way to direct him to this site to download it. I guarantee in three months I won't remember where it came from. I've come across a few game references or minor rules options I've downloaded before and really wished I could go browse around wherever I got them just to see if any other cool stuff has popped up since, and a lot of people forget to put any kind of attribution, name, URL, whatever. It's a minor edit. Please make it happen.

Good suggestions, I placed my signature and the source in the upper right corner in small text. Thanks