A Walk through Harnmaster - Treasure and Bestiary, the final sections.

First the Harnmaster Boxed Set kickstarter is on its last day.

This is a 24 Page Article

This article is in part commentary on the value of things and a catalog of treasure. I found the first part very useful and adopted it wholesale for the Majestic Wilderlands as it fleshed out a mundane treasure a lot. The latter part has a lot of flavor but it is more tied to Harnmaster and the Harn setting.

The Value of Items

The advice is not give out the "value" as what the PCs get for it will be part of a subjective appraisal than a straight conversion into coin.

Given the above the referee is advised to keep a secret treasure register where the generated value and characteristics are record.

As part of this the age of the treasure is generated. While a bit fiddly, Harn does a good job of structuring it time period into something more managable than usual. There are seven time periods each a very distinctive time in Harn's history. The unclearest are the differences, between Modern, Middle , and Anicent. A better way to look at it would be Current Kingdom, Early in the Kingdom's history, pre-Kingdom history. 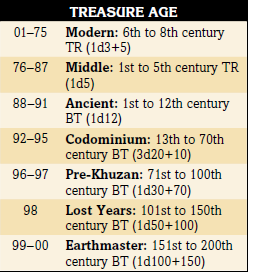 Next is the condition of the treasure when it is found. Pristine or corroded badly?

Personal Possessions
Next a useful series of tables to generate the possessions of a NPCs. I suggest making a possesion roster for common types of NPCs as it something you don't want to do during play. Possession can consist of Clothing, Armor, Silver/Gold, Usurer's Notes, Gems/Jewelry, Trade Goods, Misc Items, and Camping/Equipment.

Next are the detailed listing and treasure generation for different types of treasure.

Harn relies more on potions made from natural herbs than the traditional magic potion. For those of you who play classic DnD, I created my own take on this.

A detailed system for generating jewelry or unmounted gems. Very useful for other RPGs.

Harnmaster put some emphasis on written works as mundane treasure. The result can be flavorful and sold to the right party can net the party quite a bit.

Generating works of a magical nature. The main mechanical effect is improving one or more skills.

This section generate armor and weapons as treasure. Focusing on the mundane effect like adornments and weapon quality.

The rest of the article about artifacts talkes about the different type of personalities (artifical, natural). How does Harnmaster Magic work with artifacts. A summary of some Harnmaster Magic spells that could be part of a major artifact so you can make them without owning HM Magic. How some artifacts need mental attunement which in-game is a empathic bond with the artifact and not some artifical treasure limitation. Some ways to invoke the artifact powers. Finally how Artifacts are powered by magical charges.

The last section, 3 pages, are a table and list of Earthmaster artifacts and their abilities. Earthmaster are the enigmatic precurser race found in Harn and left several extensive ruins.

This is a 8 page article

This this section explains how creatures are presented and what their attributes means. Like Runequest, GURPS, D&D 3.X and many other system, creatures have the same attributes as character. However due to the article format that Harn uses there also an abbreviated one line stat block also used especially in the Bestiary article itself. 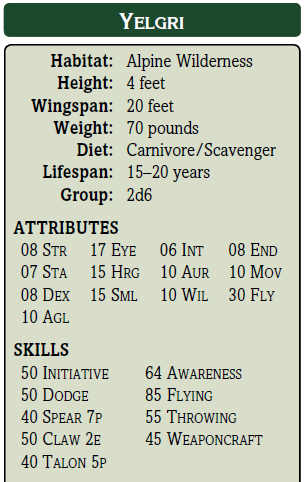 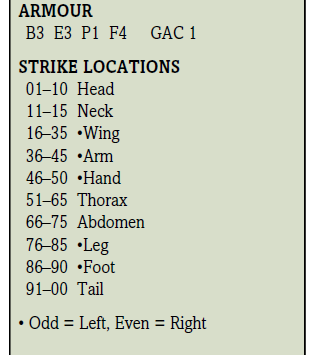 This section also has notes on Ethereals or non-corporeal creatures. Basically only enchanted weapons and spells can effect them.

It also gives notes on making your own creature using charts like the below. 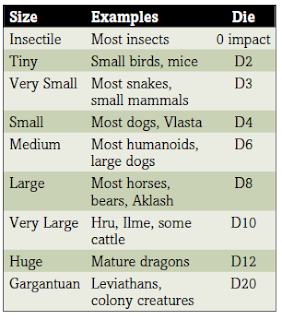 The remaining 5 pages of the article are series of landscape charts giving the short stat blocks of many mundance and magical Harnic creatures.

This is a 12 page article detailing Gargun or Harnic Orcs

Gargun appeared relatively recently in Harnic history. Created or summoned by Harn's only empire building mage, Lothrim the Foulspawner. After the fall of Lothrim's empire, his gargun servitors fled into the wilderness where they thrived after a fashion. Competing with barbarian tribes and isolated realms like the Dwarven kingdom of Azadmere.

They have a unique biology in that each tribe is descended from a single queen who lays eggs that eventually hatch a gargun. The article goes into their history, culture, religion, and the different tribes as of 720 TR.

This is a 6 page article detailing the different varities of Ivashu. These are monsters created by the Harnic God Ilvir who is said to dwell in a tower in the center of the island. There are different varities along with unique creatures. This articles details the five most common that are encountered. 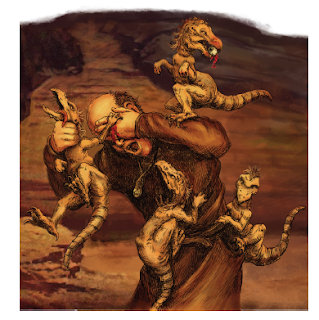 Some like the Nolah are reminiscence of a DnD monster like Trolls some like the Vlasta are their own special form of Harnic terror. However they all have unique spin due to their back story of being created by the god Ilvir.

This is a four page article.

This creatures is nicknamed the Harnic Harpy. It readly more like DnD's gargoyle but more mundane in origin. They are semi-intelligent and inhabit the mountainous regions of Harn. 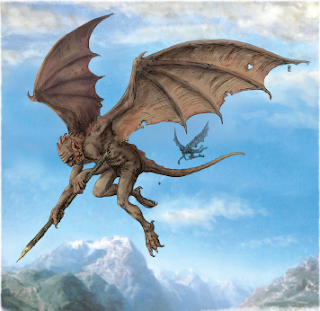 Below is an example a naturalist style inhabited range chart that nearly all the creature articles use. This one is for the Yelgri

So that it for my walk through Harnmaster. Hope you enjoyed it, found it informative and will try out the system some day. It pricey but the quality is there and been the same since the mid 80s.

The previous post was Campaigns.This is the final post in this series.
Posted by Robert Conley at 2:41 PM