A Walk through Harnmaster - Psionics

Psionics always been a bit of an odd duck in Harnmaster. Some referee used them some don't. Here they are presented as psychic powers. It important to keep in mind that unlike D&D's take, Psionics in Harnmaster do integrate with an important setting elements the Earthmasters.

The Earthmasters were an ancient races inhabiting Harn (and much of the world) predating the Elves. They disappeared leaving behind various enigmatic ruins. While Harn never spelled out in detail what the Earthmaster were, psionics abilities and artifacts are consistent theme. 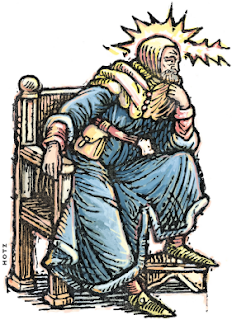 The recommendation is that psionic talents be generated in secret by the referee and then solely revealed during the campaign. Once revealed they become a skill like any other although one that more supernatural in its effect. Of course if veteran characters are being created or if it happens to fit the campaign, it may be that the character starts out with knowing some of the talents they have. It works either way.

The number of talents that a character has is based on Aura - 3d6 roll. Then a d100 is rolled and a table is consulted. 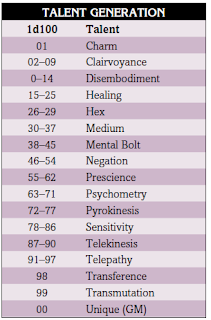 Each Talent is considered a skill and effected by the sunsigns like other skills are.

The next section gives advice on how to handle dormant talents. Which is any talent that is Mastery Level (ML) lower than 21.

It not particularly easy as even a marginal failure could cause the character to pass out. 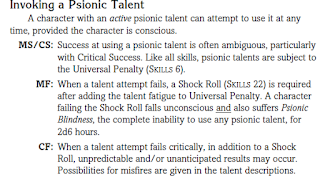 Invoking talents is also fatiguing. There is a notation after the name of the Talent on how much Fatigue is accumulated after each attempt to use it.

There are two optional rules. On is for passive invocations of three talents: Medium, Prescience, and Sensitivity. The other is about Joint Invocation of Psionic talents. 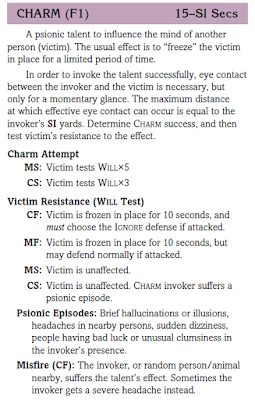 Rob's Comments
I admit I am never of fan of psionics in a fantasy setting. But Harnmaster's take isn't half bad and it does fit given the lore. So far in three decades of Harn it hasn't come up in any of the sessions or campaigns I ran.