Journey's End (for now), the Wilderlands of the Fantastic Reaches has been released! 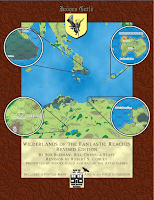 I am pleased to announce the release of Wilderlands of the Fantastic Reaches. This is the fourth of four products covering the eighteen maps that encompasses the Judges Guild Wilderlands setting. This product covers four of the maps as detailed below. The four sets combined will cover a region equal in size to Western Europe providing years and decades of adventuring for you and your group.

The first product is a 44 page guidebook containing a brief overview of and commentary on Maps Fifteen to Map Eighteen of the Wilderlands along with lists covering details on Villages, Castles, Lairs, Ruins, and Islands.

Due to the extensive use of monsters from the supplements to the original edition, this release details 7 monsters and provides full statistics suitable for use with Swords and Wizardry and similar RPGs.

The Guidebook for the Wilderlands of the Fantastic Reaches also includes charts, tables, and rules concerning the Triumphant Grand Tactical mapping system used by the Wilderlands, how to build strongholds, and establishing baronies. In addition information has been added on the demographics of the Wilderlands along with new rules governing pastoral and nomadic cultures. Because Tula, the City of Wizards, plays a prominent role in this region, rules for potion and magic item creations has been included. Finally as the Isle of the Blest straddles the corners of four maps, a combined map and list has been added as a bonus chapter. This includes the background originally written by Scott Fulton in Pegasus #3. 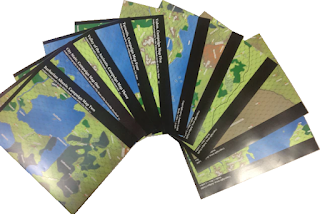 The second product is a set of four maps:  Isles of the Dawn Map Fifteen, Southern Reaches Map Sixteen, Silver Skein Isles Map Seventeen, and Ghinor Highlands Map Eighteen. When ordered via print on the demand they are printed in two overlapping halves each on a 12" by 18" poster. In addition each map is presented as a 22" by 17" PDF file.

The maps have been redrawn from the original in a color style. Instead of the distinct symbols of the original maps, terrain has been drawn as a transparent fill and vegetation represented by colored areas. This allows both terrain and vegetation to overlap. Representing more accurately the complexity and diversity of the Wilderland's geography.

This release is the final book in a series of four covering the Wilderlands of High Fantasy.

The Wilderlands of the Fantastic Reaches Guidebook

The Wilderlands of the Fantastic Reaches Map 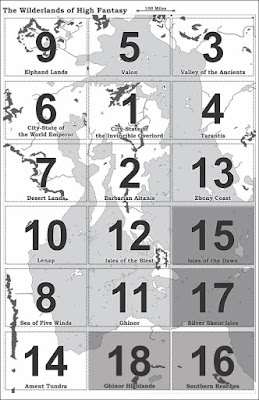 Great stuff Rob. Ordered the print versions of booklet and maps so look forward to them arriving and completing my set. Hoping to run a Wilderlands campaign next year and intending to use your maps and booklets! Really appreciate you re-creating the Wilderlands publications. It's a quality piece of work.

This was the setting of my youth. Can't wait to get my hands on this completed update. A hearty HUZZAH to you GOOD SIR!

They look so beautiful. Great job.

Ordered. Now with all four in-hand I can take them to Michael's to get them matted and framed as one big map.

Great work ! I bought both PDF and print version and will use all this material in my campaign. I started it past may ; the party is in the vicinity of Viridistan so they have time to discover this Fantastic world... Thanks for all.

I know it has been a long slog for you, but... any chance of stitching the four booklets into one complete hardback? Doesn't even have to be reformatted, really; just stick them together in order and set it up for a hardcover (and maybe softcover)...

It would be nice to have the individuals for use at the table, and the big book for perusing at leisure...

@James, I think something can be done in that department. :-)

Went and bought this plus the booklet bundle in print just now. Can't wait to have a complete set to put into a nice binder.

Would this be a good introduction to the Wildlands setting?

Ben, yes. These 4 products pretty much consist of an updated and reformatted color version of the original.

Ben, these products pretty much ARE the setting (and by "these products" I mean all four of the map groups together and their guide books). When it was originally published, the Wilderlands came out in exactly this format (though the original included mostly blank mapsheets that the players could use to actually map the world as they discovered it, as well). There wasn't any big splat book or anything like that in the originals at all. Just the maps, and the hex-by-hex listing of the major things present. So, honestly, if you buy the bundle, you have the entire setting as it was originally published, plus a little extra since Rob has taken the time to add in stats for some of the no-longer listed in modern monster manuals creatures and put in some of the rules that were published in Pegasus or other places that will make it easier to play in the Wilderlands. Hope that helps!

Excellent! I've been dying to just jump in. There are so many products. I just wasn't sure where to start. I really enjoyed Mr Conley's Points of Light and wanted more. Thank you both.

@Ben, To help things I added three catagories to represent the three broad catagories of products I work on.

Majestic Wilderlands. my own take on the Wilderlands. In a nutshell it uses the geography and place names but just about everything else is its own thing.

Majestic Fantasy Realms - Blackmarsh on my site, Points of Light I & II on Goodman website.

Judges Guild, the CSIO map, the wilderlands maps, and the guidebook. Trying to adhere to the original material as close as possible but with a modern layout and my own cartography style on the original maps.

Hi! These maps look great, and I just ordered the print bundle. The description says that PDF copies of the guidebooks are included, yet drivethrurpg makes no provision for downloading them. How to I access them?

@Mad Doctor did you pick print + PDF as PDFs are a free add-on? If not unfortunately you have to explicitly pick the option. I have complained about this to DriveThruRPG.

However I would be happy to issue you a free discount code for the PDFs. I just need your order #. That allows me to see your customer ID and issue you a code to the email you have on file with DriveThruRPG.

Thank you sir! That makes things even clearer. I've heard such great things about your Wilderlands. I've resisted long enough :)

Thank you for your quick reply. If you shoot me a message at mark.rabuck@germantownacademy.org I will send you the relevant information.

Rob, I'm still hoping that one day you will do a "Majestic Wilderlands" like version in TFT/HOW/B&BM stats/monsters and spells. It would be a dream come true for me (and a few others out there).

@Rob let me know if you got the discount. I haven't used the tool often but if I enter your customer ID I believe it should sent the discount automatically. I sent two codes one for the guidebooks and another for the maps.

Just placed my order. I have been chomping at the bit to get this one. I just started a new campaign using the Basic Fantasy RPG rule-set and this is the area we are running. I have no doubt the print maps with be as spectacular as the ones I have already. Do you have any plans of furthering the world?

And I tried to buy the pdf with the maps from Drive Thru but it would not let me purchase the pdf with the print. I am not sure how they have that set up but it is a bit annoying. The number on the order was #20372830. Now the guidebook went through fine. I have already added it to my folder and will be combing through it in just a few. I was just wondering about the pdf for the maps.

And as always fantastic work. I hope you do expand the world further. I think this setting is so under appreciated.

@Motodo I found your order and created a $0 discount for you. Let me know if you don't get it. You may have gotten two emails. Ignore the first one and use the second one.

Rob you are the best!!! I got them. I appreciate it greatly!!!

Finally getting a chance to dig in. So far I adore these products! Really good stuff here. Thank you for taking the time:)

Would love to know details of your 5E game and how it went..

Thank you so much for doing this. I've run campaigns in Harn and a dozen other settings in my life, but I always seem to go back to the Wilderlands as a place that anything can be fit into. Thanks for everything you've done to keep it alive.