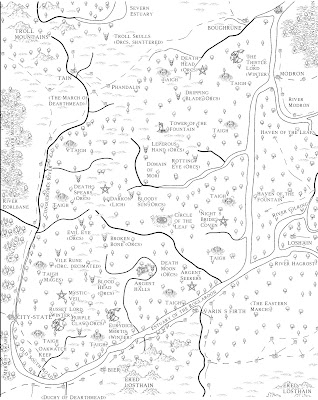 The party talked to the dragon Mori (center and up) and succeeded converting her to their cause. In turn she explained what she knew about the forest. But rather than write a description, I described it visually with the above map. Figuring that it was more effective in visually conveying the highlights of what could be found.

Recently I did another for the current Swords & Wizardry campaign I running using my Majestic Fantasy rules. In this case it is about the Valley of the Dead Queens northwest of Viridistan. 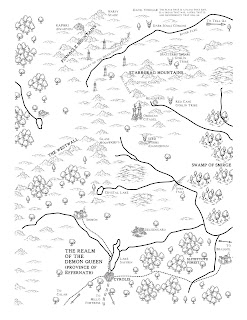 As with Dearthwood, the characters were able to have a long discussion with allies knowledgeable about the region. I felt it was easy to convey the information visually. In the valley you can see the towers of the Dead Queens along with the Obsidan Tower and the Serd Worms.

Keep in mind the scale of the Majestic Wilderlands is 12.5 miles per hex not 5 miles hex. So the maps are larger than the original counterpart. Which is why villages are now castles or towns.

Below is how the above looks on the main map I drew for myself. 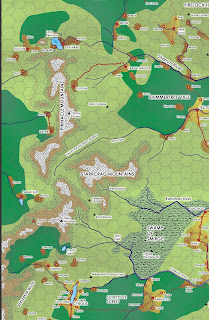 Finally here is the first poetic map I drew. It was for the last GURPS campaign I ran in the Majestic Wilderlands 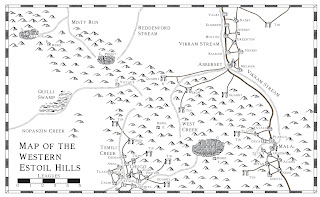 And the written summary It is written from the point of view of the rebel giving the information.

Posted by Robert Conley at 4:13 PM

You have such a gift. I have no visual or spatial imagination so drawing a map is out of the question for me. (I have trouble devising small dungeon levels after all these years.)

How can I get my world ideas put into a map like yours without spending a lot of money? Do you have any ideas?

I agree on your gift. I can draw dungeon maps, but drawing wilderness maps is a skill that escapes me. I overanalyze everything, and try to make everything make real-world "sense", and get paralyzed by "Would this conceivably happen"? I have been trying to devise a map for my sandbox I want to run with my students, but every time I start thinking about, wellm I want this to be near mountains, but I also have some swamps I want to put in, but swamps wouldn't be anywhere near the mountains, so what am I going to do, none of this makes sense, I GIVE UP.