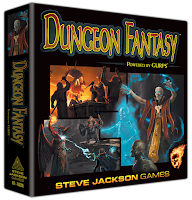 
I pledged at the $250 so got everything that the kickstarter had to offer. 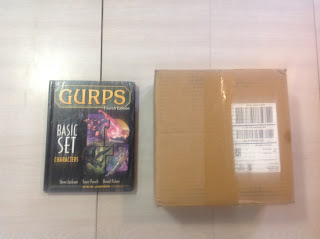 Here is the box with my battered copy of the Basic Set - Characters book beside it. 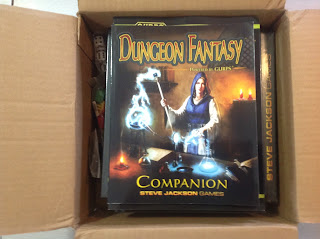 Opening the box this is what I see. 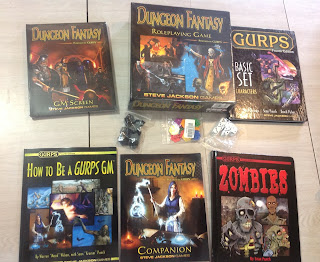 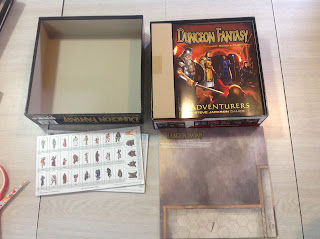 OK opening up the box I see some full scale maps (1" = 1 yard = 1 hex), cardboard heroes, and the DF RPG books! Note that little under half of the Cardboard Heroes are PCs and the monsters are biased to the ones that appear in the included adventure. 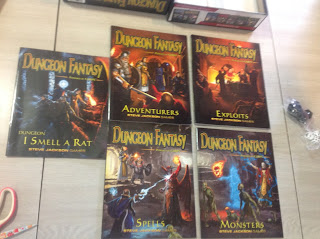 So I pull out the five books, a set of three dice with pyramid logo, and twelve more bases.

All and all a pretty good haul for my money. I will be posting a review of the content.

Posted by Robert Conley at 4:46 PM

Sweet. Mine arrives in a couple days, and I'm "only" getting the core set and screen. That Companion looks nice ...

A nitpick: what you show here isn't all the stuff included for $250, which is also a Pyramid subscription, all related articles in a compilation and perhaps the entire GURPS Dungeon Fantasy existing sourcebooks in PDF, among other things (I'm saying it by memory).

One of the local stores backed at a Retail level, so I was able to score that Companion, plus some extra dice, just as my box arrived. Very sweet contents - hell of a value in that set.