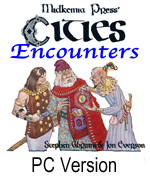 I got Cities when Midkemia Press when it was first released as a PDF a couple of years back. It consists of several sections: random city encounters, random village generation, and city catch-up tables.

The first two are self explanatory but what is city catch-up? Basically it is very similar to the downtime actitives in DnD 5e DM Guide only on steroids. So characters can make investments, look for jobs, etc.

None of the sections are complicated but they are comprehensive.

For example random city encounters consists of 28 tables ranging from Events, Slave Gangs, Warriors, Barbarians, Aristocrat and even Deities. There are master tables that assign varying probabilities to each of these tables depending on the type of district (wealth, poor, etc), the amount of traffic on the street (main or lesser), and the time of day (Day, evening, or night). For example Table 11 Aristocrats is has 1% chance of being rolled in a poor district on a main street during the day. While in a wealthy district Table 11 has a 8% chance of coming up. Many of the 28 tables have sub tables and a handful that go down two or three levels of tables.

So while the City Generator appears to be simple there is a LOT of stuff packed in there. Something you don't realize until you seen the original tables. I coded it up as a Inspiration Pad Pro random table and it took me a couple of years, working here and there to complete it. There just that much stuff in there.

Of all the random urban encounters tables I ran into Midkemia's is the best and give the best sense that you are living in a fantasy city. There are some silly and wacky results but they don't come up often. The majority of the results are basically built in adventure hooks for a campaign.

Trying to use Midkemia's Cities from the book (or PDF in my case) during a session is a bit of a chore. But once I had it coded up in Inspiration Pad Pro it was a snap to use. So I recommend getting the official app, It will be one of the better $2 spent. Note it is a java app so you will need to have the java runtime installed on the Mac or PC. If you have a Android device it is available on the Google Play store.

You also may want to get the PDF for $5 as it has the fore-mentioned village generation and city catch-up. Unlike random city generation during a session, those two sections are stuff you do outside of a normal tabletop session so the PDF works fine.
Posted by Robert Conley at 9:15 AM

I will add my love for the Cities book as well, just incredibly useful and fun.