The One where I get GUMSHOE 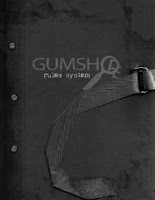 My friend +Tim Shorts is a big fan of GUMSHOE and used it effectively to run a fun supernatural campaign using the Esoterrorists rules.

And I never really got the point of the system. The campaign yes but not the system we were using. The who "find your clue automatically part" was throwing me off. I understood the problem caused by missed dice rolls when running campaign around solving mysteries however GUMSHOE's solution was going completely over my head.

Then I found that Pelgrane Press had a System Reference Document under the Open Game License. It is stripped of any setting or genre specific reference and lays out the system in a way that I finally got it.

The key was this sentence on page 28


Assuming that they look in the right place and apply appropriate abilities to the task, GUMSHOE ensures that the heroes get the basic clues they need to move through the story.

Now I can see how the character can still miss a clue or even only score a partial success. You still have to be in the right place with the right ability. Got it.

One thing I found useful in recent years is to learn how to play and referee systems that are out of my usual range. I find that broaden the range of techniques that I can bring to bear on the campaigns that I run with the systems that I like best (GURPS, Hero System, ODnD, Traveller, etc). One of my weakness is running procedural mysteries like the ones found in Sherlock Holmes.

GURPS Mysteries has a lot of great advice and is probably the best book on the subject in the hobby. Given that people like Robin Laws was involved I though it was important to figure it out.

And I am glad I did, as it solidifies my thoughts on the subject and reinforces what I been developing over the past decade for my sandbox campaign. Basically I assume a certain level of competency if the player has the skills or the levels and will deliberately give more information about a situation than otherwise would be called for by a strict interpretation of ability/skill rolls.

That failed rolls on an attempt doesn't mean automatic failure. There will be a negative consequence like it taking longer or something break. I reserve utter failure to critical failures like rolling a 1 in DnD or a 17, or 18 in GURPS. I use the traditional succeed/fail if the character in a time critical situation like combat.

My day job involves supporting customers using my company's metal cutting machine. I observe that utter failure to solve a problem or implement a feature are very rare. Where things differ is how long it takes to solve a problem or to implement a feature. That the best employees at where I work are able to solve things faster because of their high skill in a particular area. So for me the skill roll is more of a question of "How long does it take the character to do X." Then a utter failure.

As for GUMSHOE the system is a bit too lite for my taste, but I find the advice on structuring investigations and mysteries very useful to stand alongside what is said in GURPS Mysteries.

This was an interesting post. I had a similar experience with Gumshoe. It still isn't quite the system for how I like to run things, but someone explained this same point form the system document to me and that enabled me to grasp it a bit more. Actually I found the core idea useful: they are basically saying "Hey do we really need to be rolling for X?" That is a useful question for any designer. In the case of Gumshoe that is answered in service to flow of an investigative story but there is no reason why you can't apply that notion to other goals. I will say their books are really well written most of the time, so they are often worth picking up for concepts and flavor material alone.