The one where I go to Con on the Cob

Late last summer, most of the Monday Night Group ( +Tim Shorts , +Daniel McEntee, +Ken H , +Chris C. ) decide to head out a convention in eastern Ohio called Con on the Cob.  I went there last year with Dan but just for Saturday. I had fun and it was nice to see a healthy mix of OSR gaming so I resolved to go for the full weekend.

My past experience with gaming convention is that they are more fun when I run some games. While hotels, have beds, sofas and chairs there is usually only so much you can do with a single activity during the day. Whether it is playing a game, or shopping. I find a mix of activities makes for a better experience. I signed up to run three events, Scourge of the Demon Wolf for 5e, a playtest of Night's Bride Coven for ODnD/Majestic Wilderlands, and the initial playtest of Outpost on the Orclands also for ODnD/MW.

Because I was refereeing, I brought my gaming room errr stuff. Yeah I could run with a lot less but I like to put on a spectacle along with a good game. In theory I could get it down to my tool chest and a portable luggage stroller but the thing is that I have to sort out what I need first. I have everything already packed nice and it just easier to haul it all than to open it all up sort out what I need and later sort it back in.

Thursday the 16th
Unlike Tim and Ken, I could not take work off for Thursday. It was a two hour drive plus a stop for dinner. I went with Dan and we got there around 7:45 pm. I knew I would be tried so did not bother sign up for any games. Instead I briefly hit the gaming room and met +Roy Snyder who was running the a RPG booth featuring Goodman Games and classic RPG material (ADnD, Champions, etc). We talked shop and hopefully it will lead to my stuff appearing at a few more conventions.

Friday the 17th
The hotel, the Clarion in Hudson OH, has a outstanding breakfast buffet. I ate with the Monday Night Crew and did some looking around in the dealers area until our first game.

This was run by +Eric Daum, an 0 level funnel adventure where we were all members of a stone age tribe living in a Pleistocene world of glaciers and mammoths. I had a cordmaker, weaver, gather, and a hunter. The hunter, Unak,  was probably the groups best fighter at 6 hit points and armed with a spear. Unfortunately he only had a 9 strength. However the most memorable character was Leo Jenks the cordmaker. He was really enthusiastic about everything and continually rushed ahead of everybody. He actually survived relatively intact until eating the wrong mushroom turned him into a Hodar. Unak helped the party by successfully parley with a wounded yeti. Something that proved useful later when Leo Jenks needed to be carried after the mushroom incident.

Eric did an excellent job refereeing. The look on his face midway through the game when he "got" what I was doing with Leo Jenks. Much hilarity then ensued. 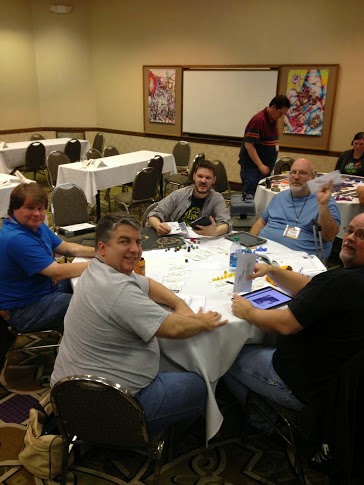 Scourge on the Demon Wolf, the 5th edition
If wizards going to put a third party license and if I want to be ready to put a quality adventure, the time to start is now. So I decided to convert Scourge over to 5th edition and give it a shot. The group was excellent consisting of a good mix of gamers. Two ladies, two RPG, novices, some 5e novices. I had them make characters on the spot.

My 5e character creation support material wasn't up to the same standards as Majestic Wilderlands so it took longer than I liked. But the good news I think it can be just as fast as ODnD/Majestic Wilderlands once I have everything made. The biggest improvement will be having all the core classes in this format. I did it for the cleric folks who took that class were able to complete their characters in less time. Also because I had two RPG novices I got some insight one what needs to be explained in the cheat sheets.

The game itself was highly interested because the group took a path through the adventure that haven't been taken before. The typical route through Scourge is

This time Kensla didn't factor into it at all. Instead what happened was.

I had the fence hook in from the beginning but until this group nobody ever followed up on it. Good thing too otherwise they would have joined the first huntsman in the stock when the killing continued.

My side of the table in the aftermath of the last encounter. 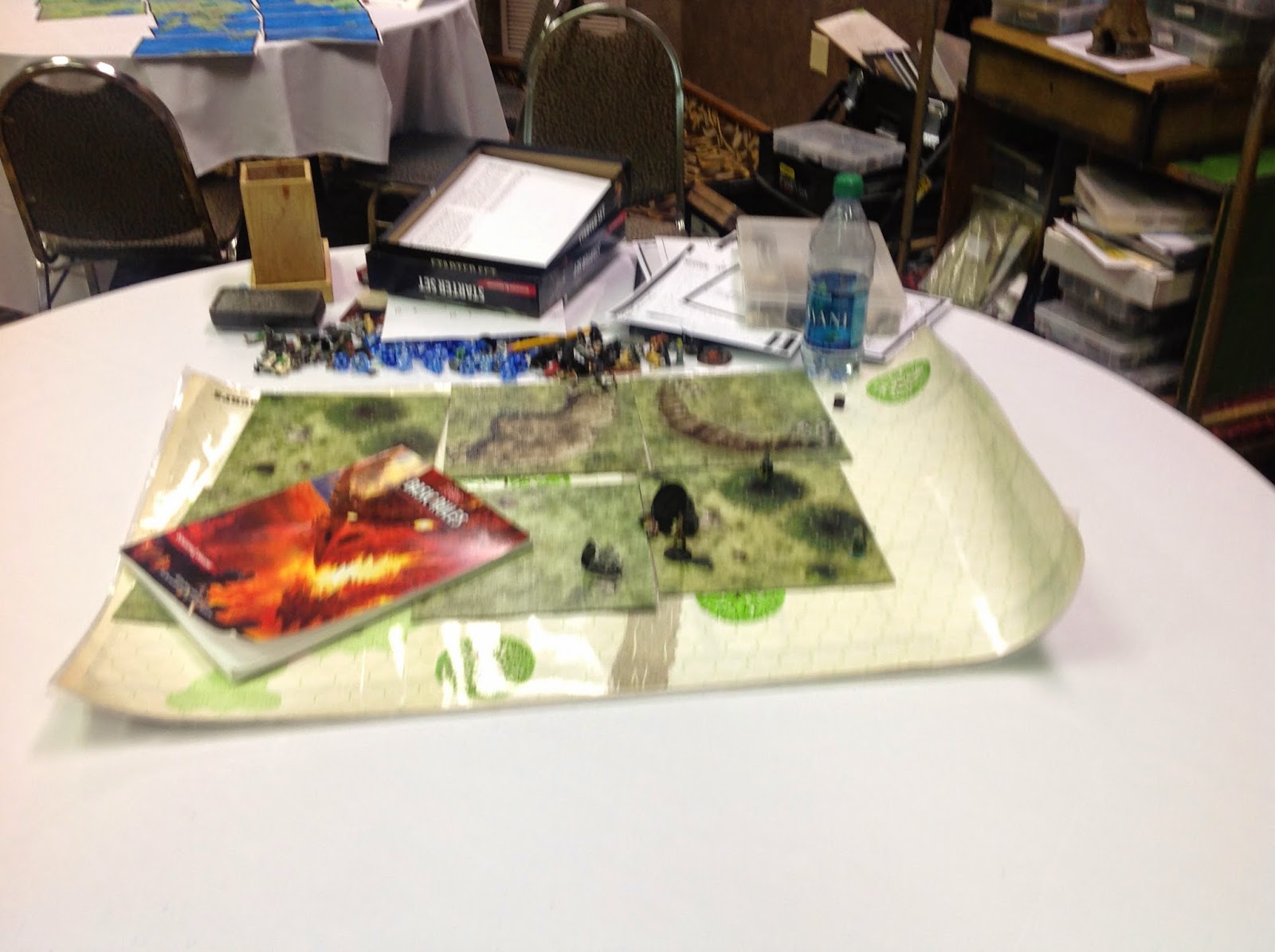 Night's Bride Coven (ODnD/Majestic Wilderlands)
Total bust, which was a bummer as this adventure was the reason I hauled all my Dwarven Forge to the Con. Otherwise I would just packed a box of selected pieces. But it was probably a good thing because I was able to play ...

Esoterrorists
One thing that +Tim Shorts is good at is running atmospheric adventures. And he makes pregens he tailors them to the players so that it is a snap to roleplay. What makes it more impressive is that he does this with multiple genres and without giving us stereotypes. This time I got Mark Steele a Meadville Police Detective.

The adventure centered around a haunted house in Saegertown. Tracking down leads and figuring clues so that the other world doesn't leak through any more than it has. One thing Tim does it is make props that looks like they are ripped from actual sources. There was Meadville Tribune article that if I didn't know any better was a real article. And he works local legends into the adventure to be the point that google search has the details on what we were encountering in the adventure.

Unfortunately the game was cut short due to me starting to nod off. It was a long day and I needed to sleep.

Saturday the 18th
Another good breakfast with the crew and we were off to the races. I made the bulk of my purchases at this time. I scored another set of Dwarven Forges Medieval building extra to complement the Medieval building sets I already got. I picked up a monochrome D2 Shrine of the Kuo Toa. I am slowing acquiring all the monochromes modules. Plus three 2nd/3rd edition Champions modules Enemies II, and Enemies the International Files. 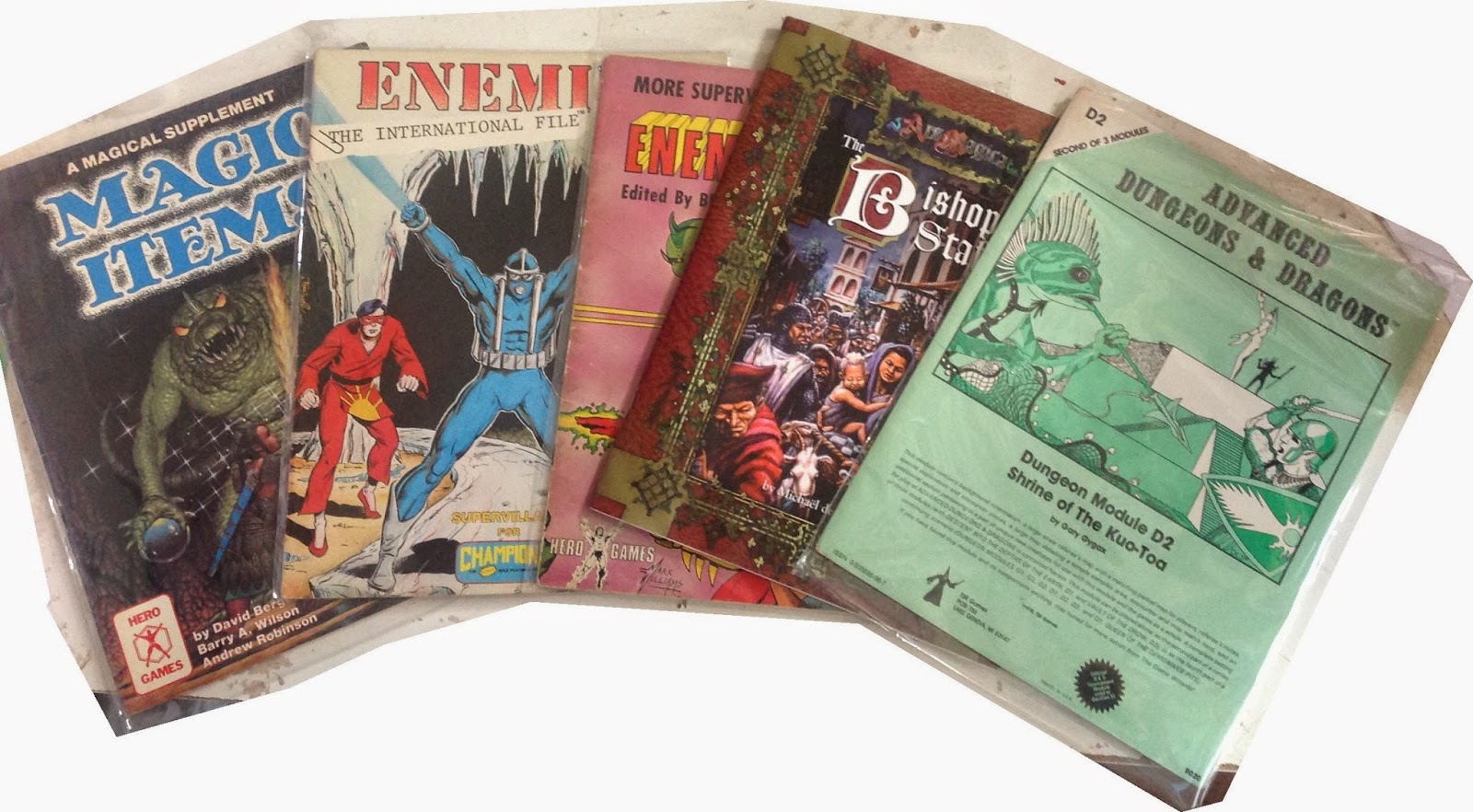 DCC RPG, Tower out of Time 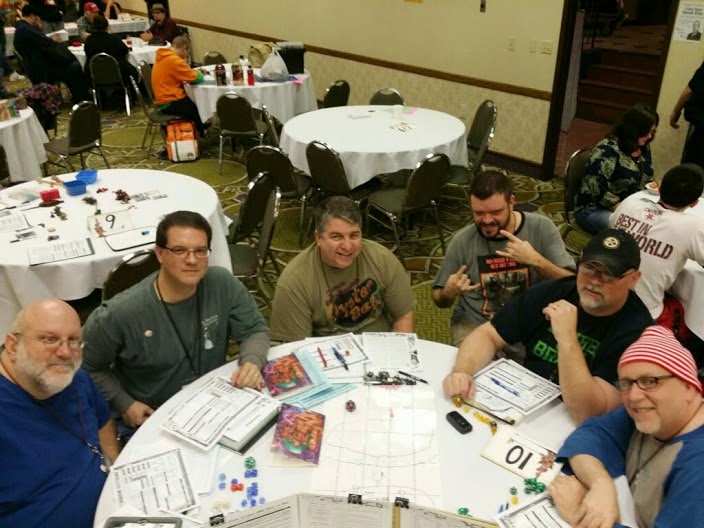 This was a good adventure run by Roy Synder. I opted to play a human wizard and of course he had to come with a 5 personality. So I racked my brain to find yet another way of playing a low charisma character that was different then all the others ones I played. I settled on using a loud nasaly voice similar to the bishop in Princess Bride, and expecting people to understand precisely what I am talking about while not supply all the details. I guess I succeeded as Ken really wanted to use his character to kill mine.

The adventure itself was interesting and revolved around some type of organic time capsule with dinosaurs and ape men. I had a big moment at the climatic battle when I color sprayed the big bad guy (and many members of the party). I took some of Dan's Halfling luck, a lot of my own luck, and spell burned all my physical attribute down to 9 and roll a 27 or so. Basically ignited the equivalent of the flash from an atomic bomb. A stray ape man took me down as I rushed in and tried to save Ken's Dwarf. You think his character would have been more grateful.


Outpost on the Orclands (ODnD/Majestic Wilderlands)
This is was my first playtest of a new advetnure I am working on. Where Night Bride's Covern is a traditional dungeon crawl. Outpost is patterned on Scourge of the Demon Wolf. I setup a situation, throw the players into the middle of it and watch the fun begin. Of course the first time I do one of these I have no clue what they will focus on so I had to play a lot of it by ear.

The situation in this case is that the party started hanging out at the court of the local baron looking for a job. A noble's court was the equivalent to a medieval job fair among other things. Well the Baron got a request to send some guards over to the bishop. The party caught his eye and was sent over there. Once at the Bishop they were each paid 100d (sp) to go to Woodford Abbey and fetch the quarterly tithe owed to the Bishop. Woodford was the site of a popular pilgrimage site to St Caelam the Dragonrider. Housing a relic, St Caelam's sword thrust in the middle of a dragon skull.

The adventure featured star-crossed lovers, malevolent faeries, a corrupt abbot, a wrathful knight, a peasant revolt, diabolic warlocks, and of course a whole lot of orcs.

The party did well and really did a good job roleplaying. It was fun to see the goals of the Paladin of Mitra and the chaotic fighter versus those of the Dwarven Cleric of Veritas and the human magic-user, versus of the gnome warrior who was in it for the money.

As for the adventure, now the initial run through is done, I have a baseline on which to flesh out the details. I also have a better grip on how the complications I introduced interact with each other. I also got to use the Dwarven Forge stuff for the final battle with the Orcs along with the new Dwarven Forge medieval buildings. Finally I got to show off the painted yurts that Tim strong armed me into buying at origins.

It was midnight when I was done and Dan had the outstanding suggestion of taking everything to the car rather than hauling it back upstairs.

The final climatic battle against the orcs. Show both the dungeon Dwarven Forge and the some of the Medieval Building set. 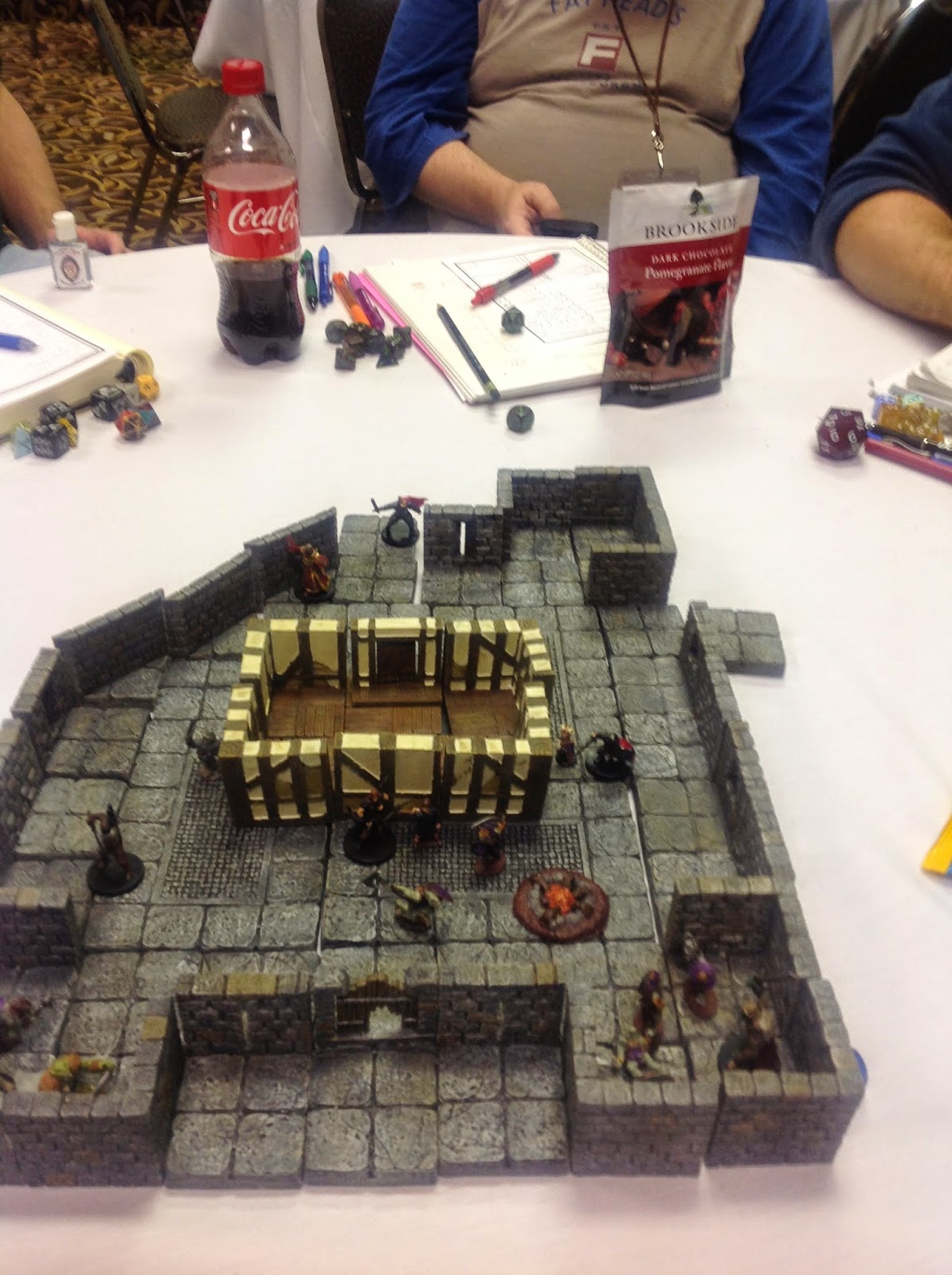 Sunday the 19th
I lounged around while Dan learned the new Shadowrun Card game. I also picked up one final DnD 5e miniature booster box and got a Green Hag. I was hoping for one more so I can have a set of three.

On the way back Dan I stopped to eat. We were definitely feeling the effects of the weekend even tho it was early Sunday afternoon. I helped Dan with a game of Settlers of Catan on my iPad which he ultimately won against three computer opponents.
Posted by Robert Conley at 9:58 PM