It took me a while but I finished up the combined map of Southland (from Points of Light), Blackmarsh, and Wild North (from Fight On #3). While the Wild North was originally designed to dovetail with Map 5 (Valon) of the Wilderlands of High Fantasy, the southern edge will be redesigned for version 2 and overlap with Blackmarsh instead.

The map shows the relationship between all three maps plus added territory. I know there no hex numbers but I decided to leave the Blackmarsh and Southland numbers untouched. The rest is left blank. If you decided to detail it yourself just give each entry a code on a copy of the map and in your notes.

Eventually I will expand the sides out to Blackmarsh letter sized maps and those maps will have proper hex numbers. 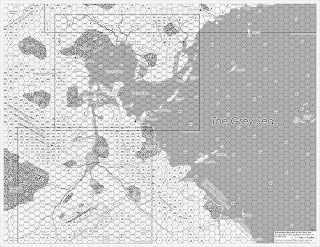 Click you will see the full size map.
Some brief notes.
Province of Vasa
The province of Vasa was recently conquered by the Grand Kingdom about 50 or so years ago. It is the strip of land between the Westwall and the Grey Sea. It is the home of a Viking culture now under the heels of late medieval western european style kingdom.

The Ring Islands
Perhaps the Mountain that Fell left debris scattered around the Grey Sea. Perhaps it something else. Maybe you need to ask the denizens of the Ring Tower about it.

The Great Glacier
Once it covered the Wild North but now is in retreat. Or perhaps the malign power that sleep underneath has awaken and is beginning to stretch it's cold claws across the world once again.

The West
Blackmarsh lies on the extreme northwest edge of civilization. What lies beyond the Pendar and White Mountains? Is there an end to the orc infested Blood Forest?

Have Fun!
Posted by Robert Conley at 6:00 AM

Excellent...one question, do you plan on publishing Wild North again or at least the map?

Yes, I plan on publishing a standalone version of Wild North this year.

The bottom four hex rows will be redesigned to fit with Blackmarsh and the Grey Sea. The rest will remain the same.

This is great. I've always liked your work and have wanted to see how you tie these together for a long time! And a new Wild North! Great news!

Just a question, when I combined the 3 maps I got a much taller version than this. This one seems to only a fraction of the North displayed. Am I missing something? Please let me know :)