Into the Dark Lands with Boog Part III

Sorry for the belated post. This for the September 28th session. I will have the notes for this week's session up on the weekend. After the conclusion of this adventure Boog survived to be 2nd level! Also I rolled maximum hit points for a total of 26!A bunch of rot grubs fell on Corum and Grim. Boog, Corum, and Grim manage to knock a few off. A few burrowed in and the party managed to burn them out. The shrine had a curtain made of flesh along with three wooden masks for the statue. Wolf, Goblin, and Bird. After searching the room the party went further in. Found a latrine and killed a goblin taking a dump. Pushing further in the party discovers a temple with four black goblins. The fight doesn’t go well and Boog fumbles his halberd away. Boog takes a potion of speed aging him by one year. The party manages to down the four black goblins when the Goblin Lord appears. It turned out that Boog was charmed a while ago by the Goblin Lord. The party had no choice to listen but to everyone’s surprise the Goblin Lord offered a truce along with information. As sign of good faith the Goblin Lord let Grim keep the glowing sword. We agreed to talk to Commander Sterling about the Goblin’s Lords Offer.

On the way back Grim saw a guild symbol drawn in the dirt of the path. Looking around he found Mo a fellow Halfling thief one of Waldron’s cronies. Mo is not happy with Waldron and told Grim that Waldron has set Bear’s traps along the path we were using. We headed back to the fort by a different way. We also learned that Waldron has five to seven men including Smoke and Manny.

Back the Bastion, the party got healed. While we were eating, Grim and Corum talked to Marshall one of the farmers. It turned out that Waldron is promising the farmers a lot if they would join him. Prall left the Bastion to join Waldron. We took Marshall to Sterling who was saddened that Manny left. Sterling mood picked up after we told of the truce offer and he readily agreed.
The next morning the party headed back to the Goblin Lord to tell him that Sterling agreed to the truce. The Goblin Lord seemed pleased at this and told us that one of the outlying villages, Cason, was going to be attacked by Hobgoblins. He also gave Boog a +1 Ring of Protection. It can’t come off unless Boog decides to let it come off. The Goblin Lord also assigned one of his Black Goblins to accompany us.
The party debated about whether to go after the Hobgoblins or Waldron and we decided that the Hobgoblins were priority. Cason was a day’s hike away so we left right away. Along the way we found a band of four hobgoblins and we ambushed them. The fight was nearly as bad as the Black Goblins and Boog injured his arm. Luckily it was his off arm so he was able to use his footman’s mace to continue fightings. Afterwards the party found a cave and retired for the night.Here is the adventure record. 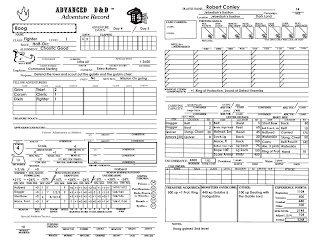 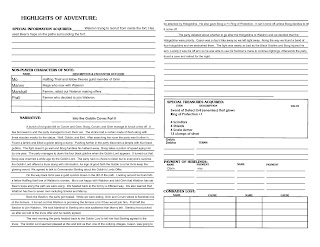 Posted by Robert Conley at 7:05 AM