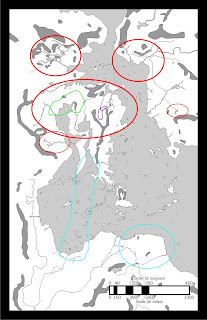 James over on Grognardia has a interesting post on campaigns created through play vs those that are designed. Like him I noticed in the original boxed set of Forgotten Realms two areas seem to get far greater detail than the rest of the setting.

I have the same experience with the Majestic Wilderlands. The graphics on the left show all the different areas that I used or planning to use in campaigns.

The red areas show broadly my Main Campaign Areas. The largest runs between City-State and Viridistan and is the setting probably 80% of the campaigns I ran including my current two games.

To show how far a typical campaign runs I outlined my group with Dwayne, Tim, and the Rusty Battle Axes in Green. And Jerry and the Gold Star Anime crew in Purple.

The thinner red areas show regions that were used for one series of adventures only. The light blue areas are possible future campaign areas that I written some detail on. The one is the lower right corner is Ghinor which I designed with a combination of the Medieval Crusades and Italian City-States of the last Middle Ages.

The long area to the left is a campaign where the players are refugee fleeing the downfall of the Kingdom of Antil. They are huddled in camps along the thin sea to the top of the outlined area. Their mission is to sail to the south toward the bottom of the long area to find a new land for the refugees to settle and then return. There is a deadline as the conquerer of Antil will eventually reach the camps within a year or two and the hopes of freedom will be extinguished.

Your approach (or view, or whatever you care to call it) is intriguing. I've long thought along similar lines, but alas, a long period of not playing D&D has left more open terrain than filled-in.

My own game world covers a similarly large area. However, the campaigns seem to end up happening in the same part of the game world over and over again.

Do your players generally want to play in a new area for every campaign, or has it just worked out that way?