This was area of my first regional harn style map.

This originated in an off hand comment during a early AD&D campaign with Tim and D. They were traveling from City-State to Viridstan and arrive there in a matter of days. With the five mile hexes travel is often quick. The players were surprised and D said "You know Rob I expected this to take a month." We got talking and it came out they thought everything was way bigger. So I decided to expand the hexes out to Harn's 12.5 miles. Mainly because the original Harn book had an excellent chart on travel and good travel rules.

Like my City State Map, the original Wilderland campaign maps were wearing out. Encouraged by the CSIO redraw I tackled the Regional map. First I wanted more consolidated maps. It happened that much of the Wilderlands was oriented vertically so I chose hex sheets that were taller than wide. The hex sheets I believe came from the Armory who sold huge 24 inch by 32 inch sheets. I bought several packs and got to work.

The version below is actually not the first one of this region. I used the first one for a couple of years until it too was wearing out. Plus by now I had collected a nice collection of coloring pencils and color sticks. Note that Color Sticks had the same "lead" as the pencils . They were useful for coloring huge areas. So I redrew the map again. Other than the colors it is the same map as the original.

The outline was developed by eyeballing hexes and making sure the coast lines entered and exited in the correct location. Yes it was as tedious as it sounds. However I had the presence of mind to lightly draw in pencil before inking. So mistakes were easily fixed. 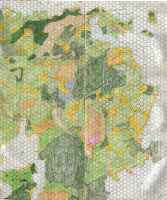 I kept at until had nearly everything north of the Isle of Blest redrawn.
Posted by Robert Conley at 6:00 AM