Another Harn Day: The City of Azadmere and Kingdom of Kaldor Hardcover Kickstarter.

Columbia Games released their latest Harnquest the dwarven city of Azadmere. If you needed a dwarven city in your campaign this is the one to get. Compared to the original release the NPCs have been fleshed out and numerous adventure hooks been added to proved reasons for (mostly) human PCs to adventure there. 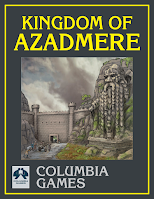 Except in a few rare instances Harn has been presented as a series of loose leaf article designed to be placed in  a three ring binder.  Now that Columbia Game is nearly done refreshing and updated their entire list of Harn article, they decided to take selected articles and kickstart them as a limited edition hard cover book.

The first up is the Kingdom of Kaldor Hardcover. 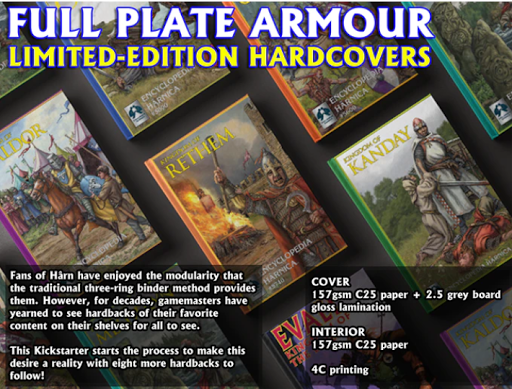 The Kingdom of Kaldor is an isolated large feudal realm in eastern Harn. Of all the different kingdoms on Harn, Kaldor has the most "Game of Throne" potential as King Miginith is growing more ill with no clear successor. The intrigue along with elements from the surrounding wilderness can make for a interesting campaign set on the Island of Harn.

The book has two articles bound into it. The first is the 60 page Kingdom of Kaldor Article and the second is the 70 page City of Tashal article. Tashal being Kaldor's capital and largest city.

For the Causal Hobbyists

The other benefit of the kickstarter that they are offering for $1, the Harnworld PDF, Harndex PDF, and the Harnworld Map PDF to ALL backer levels. So if you want to see what Harn is about this is a good way of doing so.

I enjoyed Harn for over 35 years not only for the setting itself but for the sheer amount of useful material it provide for any fantasy setting with medieval tropes. Harnworld and Harndex were useful to me in their original form 35 years ago and still just as useful in the current edition.

And if you want more Harn goodness check up the numerous fan uploads on Lythia.com and especially the Harn Pottage series.

Posted by Robert Conley at 3:31 PM

I can't help but think they'd be better off documenting a bit of mainland lythia instead of repackaging existing Harn products.

Adding more adventure hooks in Harn articles is a great much needed idea.