This is the fifth in a series of posts about some of the design choices I made. In addition to explaining what the system is about, it will also help folks in deciding which elements are the most useful to them. One of the goals of this project is to support kitbashing. 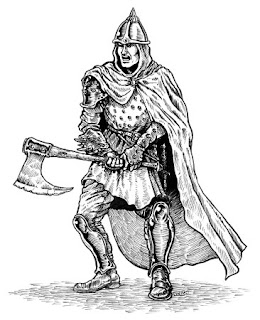 This section is the oldest of the rules I wrote. I am 50% deaf which made refereeing a crowded table of teenagers in the early 80s challenging. One reason I used miniatures from the get go that it was far easier for me to visually see what the players wanted to do in a combat round than it was for them to describe it for me. Another technique I used was to try to stick to the rules in the book when it came to combat. It was easier for me as result of my hearing loss.

As a result I tried running the combat in ADnD 1e by the rules. Some of it was straight forward and some of it wasn't, particularly initiative and what you could do in a round. In hindsight I came close but how I handled it still bogged things down in play.

Around 1984, I made my own system. Everybody got their own initiative roll and you could do two things when it was your turn; one attack and a half move. If you wanted to do a full move that all you could do that turn.

I played this for a few years before switching over to Fantasy Hero and then GURPS. When I started playing Swords and Wizardry in 2007, I picked up where I left off with the combat rules. Started to develop them further. The system still boils down to everybody gets a initiative roll, everybody get to do two things in a round. Some of the refinements included how to handle individual initiative with a large group, and combat stunts.

Of everything in the Majestic Fantasy RPG, the combat rules have most hours behind them.

Monsters
The description reflects how I use them in my campaign. I try to keep it short and highlight the elements that turned out important in my campaign.

A minor addition is that all monster get a initiative bonus. In general it is equal to 1/2 their hit dice rounded down.

I also added a line for what you can harvest off of the monster after you kill it. You can blame Tim of Gothridge Manor for this as he sold me on the idea and showed me how fun it was to incorporate harvesting into a campaign.

Perhaps a little controversial, I use a stat block to organize the mechanics for each monster. Traditionally classic edition systems used the one line stat block to great effect. I found that works well only half the time. For the other half, you only get some of what you need from the one-line stat block. For the rest of it you have read the description and parse out the elements that are important.

In the midst of my first campaign with Swords and; Wizardry I found myself making bullets list for certain creatures so I didn't have to read through the description to reference what they can do in combat. By the second campaign, I eventually wound up with the entire list of monsters formatted this way. 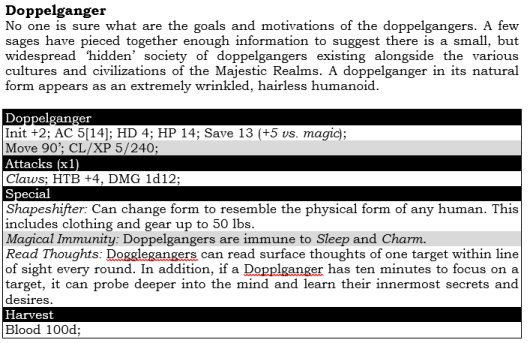 In the basic rules for the Majestic Fantasy RPG and future supplement, the description focus more about how the monster exists in the setting, and with the rest are detailed in the stat block. Aside from the addition of the Initiative stat, and Harvest, for most the rest is straight out of Swords and Wizardry just formatted differently.

NPCs
This section it not often found in various systems or editions. Because much of what my players do to make their mark on the world involves dealing with folks living outside of a dungeon or wilderness, I found I had a roster of common NPC types just as extensive as the list of monsters. They are formatted in a stat block similar to that of the monsters with the additions of what attribute the character has and any ability bonuses they possess. 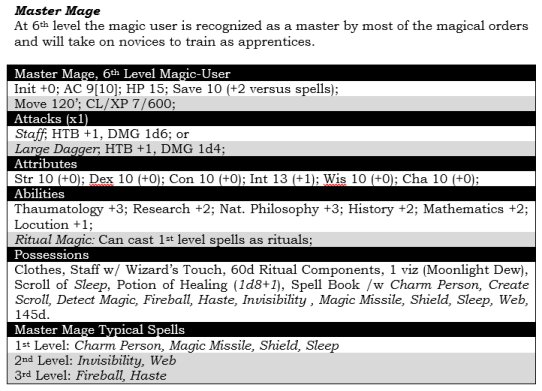 The section on Rogues give a roster of NPCs suitable for a thieves guild, or a bandit gang.

Fighters give NPCs for any type of organized military force like a city guard or a medieval army along with knights.

The section on Clerics also list NPCs at different levels of experience. There are two separate lists, one for the Church of Delaquain, the goddess of honor and justice. Another list for the Church of Sarrath, the Dragon God of War and Order.

Next I detail lists of NPCs for Orcs, Goblins, Dwarves, Elves, Halflings, and Lizardmen.
For example the Halfling Shadows who are gentlemen who form a club in order to protect the Halfling realms. These lists reflect some of the details I created over the years for sentient beings capable of having their own culture. Last are the Viridians, the only ones to have escaped the Abyss after the demons were imprisoned there after the Dawn War. In the introduction for each of these, I give the mechanics needed to a make a new type of character from scratch.
Posted by Robert Conley at 12:23 PM

I also did give initiative bonus to Monsters, but based it on the Movement Rate.