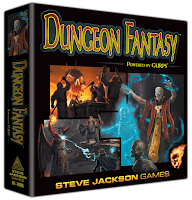 Well hot damn, SJ Games is doing a kickstarter to release a powered by GURPS Dungeon Fantasy RPG. And it is a boxed set no less with five books inside.

While I wasn't expecting a boxed set, this is something that I been advocating for a long time over on the GURPS forum. There are posts from me from as early as 2008 saying that this should be done. As well as the equivalents for the other major genres like Science Fiction and Horror. If this is successful we may see similar Powered by GURPS RPGS from SJGames.

Also note they are stressing the Ready to Run aspect which was a point I kept hammering to point where I was probably very annoying to a lot of the GURPS staff.

Dare I hope for a triple? Probably will have to wait a while considering how long it took for the first two.

I keep everybody posted on further developments.
Posted by Robert Conley at 3:12 PM

"Space Opera, powered by GURPS" would be awesome.

This is a very bold move by SJG.