They (only) made it to the Goblin Cave, another D&D 5e tale.

This week the search for the Lost Mine of Phandelver was continued. Josh wasn't able to make but +Daniel McEntee returned. He joined +Tim Shorts, +Chris C., and +Joshua Macy in their adventures around the mining village of Phandelver.

The Ongoing Story
Last week's adventure was a near party kill. But the group rallied back and managed to get Gundren Rockseer's supply to Phandelver. After a good night's rest at the Stonehill Inn, they were ready to return to the ambush site and track down those nefarious goblins.


The Majestic Wilderlands
I elected to set the game within my Majestic Wilderlands. I am more familiar with the setting and by taking the original adventure apart and reassembling allows me to master the adventure better. On the map below each small hex is one league and takes one hour to walk. Each large hex is 5 leagues. 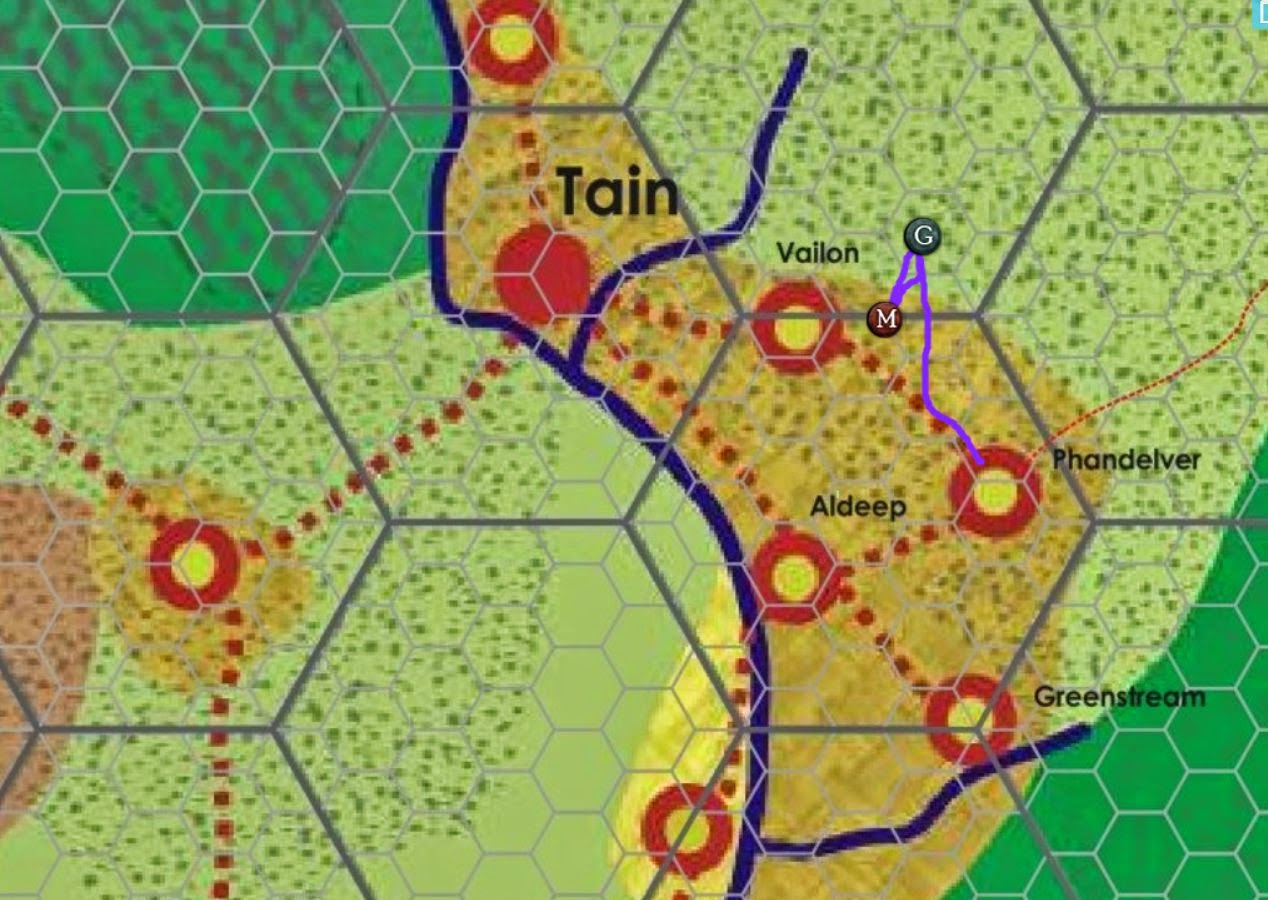 During breakfast at the Stonehill Inn the party met Keyar Nailo. After finding out their mutual interest in killing goblins they agreed to join forces. During the breakfast they discussed finding a hireling to carry their stores and any treasure they found. Talking with Toblin Stonehill the innkeeper they hired Lanar a local miner down on his luck. Then it was off to Barthan's Provision where an assortment of iron spikes, and other equipment was purchased including two healing potions.

With a confident air the party returned to the ambush and found the trail that the goblin ambushers used. They avoided a basic snare trap, but Keyar missed the pit trap on the trail while scouting ahead. Confident of the trail's safety Vognur fell through the flimsy screen on top of the pit trap suffering several severe bruises.

The party rested and continued to follow the trail. Finally by noon they spotted a cave. (G on the map above) From the heavy traffic leading to it, it could only be the goblin trail. Sidwin used his skill in stealth, honed in the back alleys of the City State of the Invincible Overlord, to sneak up to the cave entrance. However he failed to notices the  goblin sentry watching him. Nor the other goblin sentry who was creeping along and at his back. Probably why Sidwin got away from the alleys of City-State.

The goblin stabbed him in the back running him through his spleen. With the blood gushing out of his mouth muffling his cry, the rogue collapsed to the ground. The other goblin took aim at Keyar, moving carefully up the left bank of the stream, and shoot an arrow through the archer's thigh.

The wounded elf couldn't react fast enough and the two goblin sentries fired their arrow into him. One arrow pierced his shoulder and the other his stomach. The archer collapsed, his life bleeding onto the ground. Keyar has successfully passed his Boromir audition.

Nearly stunned by the sudden onslaught, Ara pulls himself together and rushes up to the stream. Through force of will he draws in the ambient mana and sends it hurtling through memorized arcane forms, directing the spell with his hands towards the two goblins. With a noiseless cry they fall to the ground in a deep slumber.

With victory at hand, Ara steadies Lanar and with Vognur manages to stabilize their fallen comrades and bore them away before the goblins could come out and investigate. Along the way the goblin awoke but a timely Shocking Grasp spell put an end to any escape spell.

Luckily they were only an hour's walk away from civilization and manage to stumble onto a peasant's cottage. There in the toft (the enclosed yard around a cottage) the party recuperated. Ara questioned the goblin harshly and managed to convince that he was the Dark One personified. The goblin quickly babbled all that he knew.

That the cave was home to many goblins led by a fearsome Orc named Klarg and his second in command Yeemik. That the hideout consisted of a long cave alongside the stream. At the top of which are dammed up pools of water that can be released to sweep out any invaders. To the right of the entrance was a wolf kennel. On the left was a little used rubble filled passage leading to the main goblin quarters. There also a bridge over the long the cave. The bridge could be accessed by going to the end of the cave, up some stairs to a room. Off of the room was Klarg quarters and access to the bridge. Beyond the bridge was the main entranceway to the goblin quarters.

During this the party spotted two peasant (a man and a child) returning to the cottage. The peasants spotted the party and ran in the direction of the local manor. Everybody except Ara climbed a ridge to keep an eye out. Ara soon learned that the goblins were holding a human captive and that they sent a dwarf to the tribe's castle.

When Ara joined the party and relayed all that he found, the group spotted a small party of peasants being lead by a warrior on horseback. As the warrior approach they could see he was a small thin man and his chainmail armor was ill-fitting. Then quite unexpectedly they were greeted in a high pitch whiny voice. "Who are you and what are you doing on my land.".

The party explained their mission and what they were doing. The warrior was Sir Varius, the lord of Highgarden Manor. (M on the map)  The knight went to see the goblin. The creature tried to escape during Ara's absence but got tangled up in the hedge. The knight looked at it with contempt and proceeded to kill it with his spear.

Then noticing that two high elves in the party he immediately started sniveling, trying to curry their favor. He invited the party to dine with him at the manor house, the group accepted needing a place to rest. There they found a decrepit wooden manor house. With mold and moss growing on the walls everywhere. The great hall wasn't much better except for the lord's chair. The ale was two days too old, the mutton tastless, and the cheese partly green. In addition the knight was unkind to his servant particularly his cook Matilda.  After offering lodging in the great hall, the knight went to bed.

At dawn the party awoke and the knight remained in bed. Matilda greeted them with fresh bread and breakfast far better than the previous night fare. When asked about her situation, she explained that she was debt bound to the knight in the tune of 100d (sp). The party became determined to free this woman. They had the knight woken and convinced him that it would be in his interest to be "friends" with the elves. That they wish to pay off Matilda's debt and retain her services. At first the knight tried to overcharge them and get 200d. With Sidwin's silver tongue and Ara asking him point blank does really want to be remembered among the fair folks as dickering like a Dwarf, the knight brought the price down to her true debt of 100d.

Rested, the party ventured into the wild hills and sought the goblin cave. However the goblins discovered the dead sentry and now sent out patrol. One of which managed to waylay the party. Keyar, scouting ahead, was the unfortunate victim of their ambush. With two arrow shots, Keyar was shot down once more, confirming that he was indeed the right choice to play Boromir.  Ara spotted them during the ambush and summon forth a Ray of Frost. But the site of his new compatriot must have shaken the elven wizards as the spell missed. The goblins bolted and Vognur and Ara gave chase. After a few tense seconds, Sidwin managed to stabilize Keyar. The goblin chase was short as they ran afoul of a bear. In trying to avoid the animal they doubled right back to their pursuer and Ara downed them with a sleep spell. The goblins were killed and the two returned to the party to find Kaylar up, taking the knee to summon up his reserves to make the final push onto the goblin cave.

A half hour later the cave was in sight. This time the party halted a hundred yards out. Sidwin and Kayar carefully picked their way through the thicket. This time luck was on the party's side and they caught two more sentries unawares. Within six seconds they laid bleeding out on the ground.

With that we called it a night and the epic journey to the entrance of the goblin cave was done. 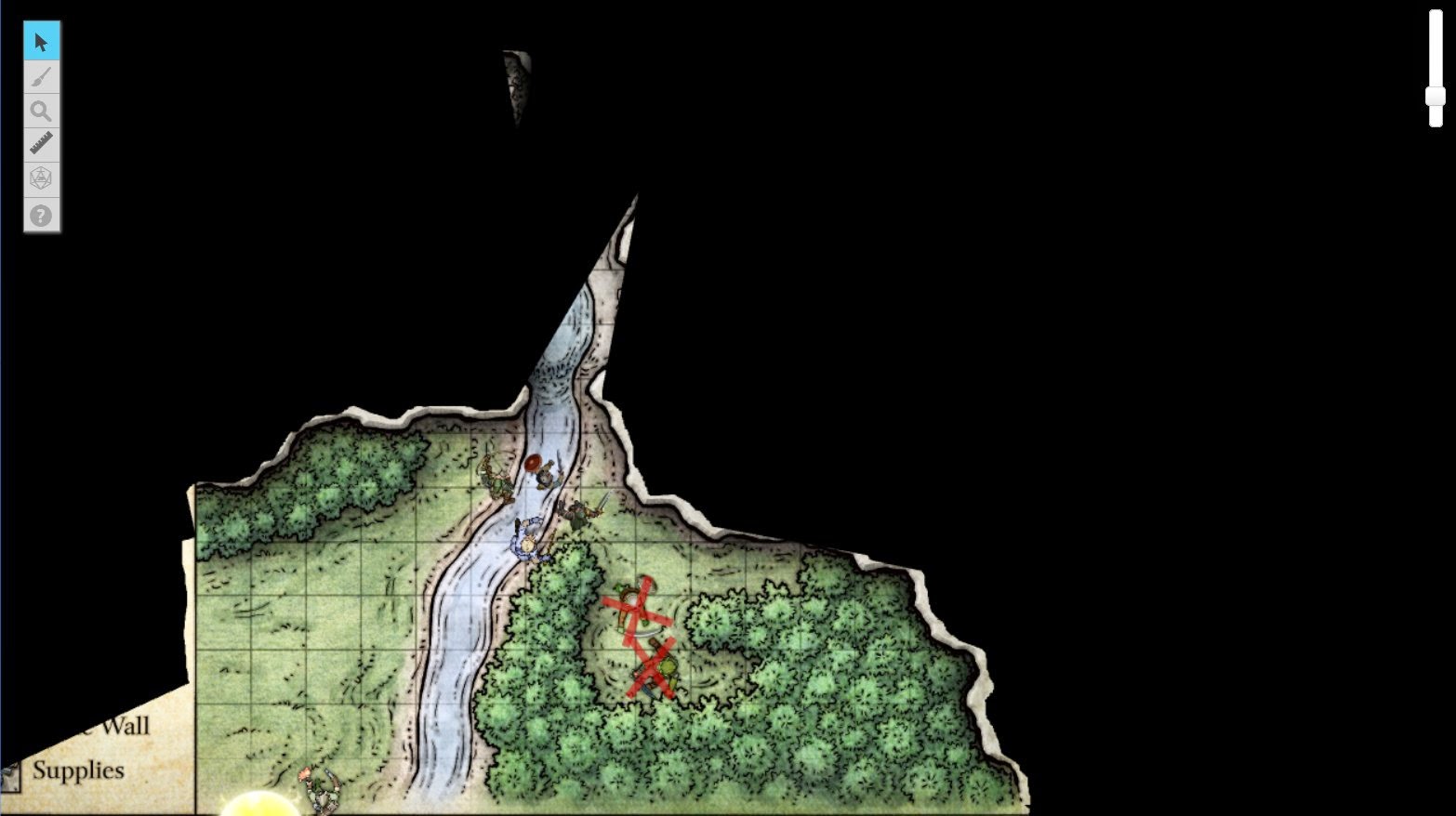 Comments
Man goblins stealth is nasty. While I was lucky in my rolls the +6 they get really makes goblins deadly when they have time to prepare. The group had some great moments roleplaying. With the PHB coming out next week I might have to turn this into a full campaign and put it into the Monday Night rotation.

The only bummer is that we didn't get to experience Roll20's dynamic lighting. There also a technical hiccup where I tried to use the new Line of Sight feature. The problem turned out to be that you not only have to enable Line of Sight for the map. But tell Roll20 that the characters had sight as well. The screen was black because I left the character blind. But we got it sorted it out and next week looks to be a great game.

I also played 5e at Gold Star Anime with a much larger group. While it is too early to be conclusive, I think spotted a quirk of 5e. That the effectiveness of larger groups isn't a linear progression, it is geometric. The group had 10 players and despite adding four times the creatures they still had a far easier time of it then the Monday Night crew. We will see how it goes.

So far 5e is a very solid system and even tho the party remains stuck at 1st level. They are able to recover from disaster and continue to progress. Soon we should see how higher levels fare. I hope.

Thanks for running this! I had a blast.

My party had much luck, they managed to surprises the ambushing goblins, find the traps, and surprise the two goblin sentries. Way too much luck :-)