The last couple of Harn Days

Columbia Games has been releasing Harn material just about every month for the last year and a half. Far quicker than their track record of previous years. Here are the last two releases.

First a general comment, all of these products are set in Harn's low fantasy medieval setting. While tied to Harn in many says because of their fantasy medieval foundation they are easily ported to any similar setting like Greyhawk or Forgotten Realms. When pressed for time to have a detailed settlement I often go into my Harn books and use one of the settlements in there.

One of the projects has been to released expanded versions of the original Cities of Harn. It not just more content, they go more into the personalities of the place. The kind of stuff you need when trying to bring a place to life in a session.

This time it is the City of Shiran turn. It is one of Harn's smaller cities located in the merchant controlled Thardic Republic. It is noted for its hedonism and for its arena games.

And it comes with this cool map of the Arena for those desiring for some action with blood and sand. 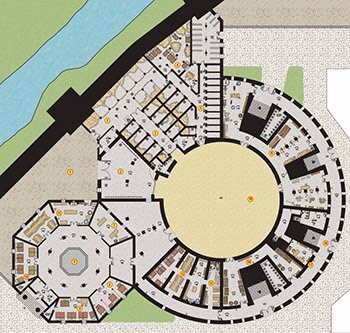 Next is the Order of Hyvrik one of the clerical order of Larani, the Harn goddess of Justice and Honor. As in real life the various Harn religions have sects and orders. Hyvrik dominates the Church of Larani in the western portion of Harn.

Next is the Order of the Checkered Shield. Some of Harn's religions have fighting order like the various order that fought in our history's crusades. Unlike the rest of the island western Harn has a good vs evil conflict between the Agrik dominated Kingdom of Rethem (god of fire and tyranny), and the Larani dominated Kingdom of Kanday. The Checkered Shield are on the frontline of Kanday's border with Rethem. Lots of adventuring possibilities with this organization.

In the past years Columbia Games have been putting out small location articles. They take a building or a small area of land and detail it. This location is about the Temple of Larani in the Castle town of Dyrisa. It shows how the above two articles (Hyvrik and Checkered Shield) work together in something an adventuring party would interact with.

Onto the second release.

Many of the cities and castle of Harn have been detailed in articles already printed. Now Columbia Games is expanding to smaller keeps.

Heru Keep is located in the Kingdom of Kaldor. It show the effect of the succession crisis meta-plot of Kaldor as on a smaller settlement.

Menio Keep is located in the Kingdom Melderyn. It is interesting example of a settlement dominated by a single industry. In this case pottery. While it sound mundane, where there is money involved there is intrigue and this place is just as dramatic in its own way as Heru Keep and the succession crisis.

Next is an addition to the Harnmaster beastiary that focuses on Harnic Lycanthropes. An interesting section are details of the attitudes of the various religions towards Lycanthropes.

Last is another small location article, this time focusing on a Charcoaler outside of Harden Castle in Melderyn. What makes this useful is that Charcoaler not only have a shop in town, they have to maintain forest camps where the charcoal is made. This can be used to add an interesting encounter to a wilderness adventure.

Again just a warning Harn products are pricey but the the quality is always top notch.
Posted by Robert Conley at 6:00 AM