Thanks for Tenkar of Tenkar's Tavern for organizing this. I chose to use Swords and Wizardry as the foundation for my Majestic Wilderlands supplement because of all the retro-clones it was the one I felt to be the closest to an ur version of the world's most popular roleplaying game. And the easiest to use as a foundation for the type of supplement I was writing. Matt Finch did a great job in writing Swords and Wizardry.

So in the spirit of Swords and Wizardry I poked around the stories and accounts of the origins of tabletop to see if there something I could use. Finally in Jon Peterson's Playing at the World I found an account of how a medieval wargame scenario called Siege of Bodenberg inspired Gygax's interested in medieval wargaming and starting one of the many chain of events that lead to the creation of tabletop roleplaying by Gygax and Arneson.

The centerpiece of the siege scenario was a vacuum formed model of a castle from a company called Elastolin. Poking around the internet I found not only images of the castle but a posting of the rules used for that scenario. 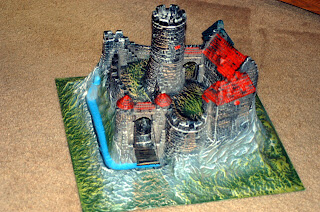 So my plan I would draw professional quality map of the castle, a ruined version, along with an adventure to accompany it. The release the whole thing under the OGL. But I had to deal with family matters of far more importance and so only got the first level done. I will continue to work on it and hopefully get it done within a few weeks.

So here is the first level of Castle Bodenberg. Click to get a larger view of it. 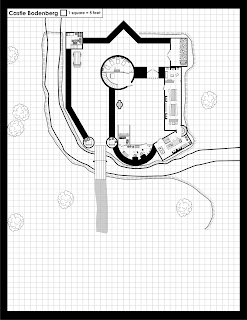 Once again thanks to Tenkar and Matt Finch for making Swords and Wizadry Appreciation Day happen.
Posted by Robert Conley at 6:30 AM

I seem to remember reading somewhere that the Moathouse in T1 is based on Bodenberg Castle.