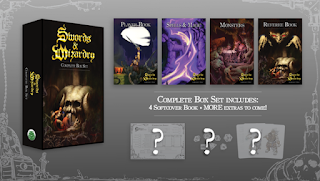 Matt Finch and Frog God Games is doing a new printing of Swords and Wizardry Complete and this time it is to be a series of digest sized booklets in a boxed set. It is nearing $50k at the time I posted this. The rules are the same as Swords and Wizardry Complete, but the kickstarter offers an array of extras to accompany the boxed set. Also I been told that the box itself is deeper than it needs to be to hold further expansion.

Why Swords and Wizardy?
Back in 2008 when I was deciding on what to base my Majestic Wilderlands supplement on, I found Matt Finch's Swords and Wizardry Core. Compared to the d20 SRD and the other retro-clone of the time, I found Swords and Wizardry, Core to be the closest thing to an ur version of DnD available. In addition it was accompanied by a version of the rulebook that was an editable document. I especially liked how Matt incorporated ascending AC alongside the traditional AC system.

So I used it as the foundation for my Majestic Wilderlands supplement and all the work I done for classic edition since. In addition I am making sure that the Majestic Fantasy rules that I am working remain compatible. That it can function on its own or as a supplement to Swords and Wizardry.

Digest sized books and The Boxed Set
I am partial to using digest size (5.5" by 8.5") for my rules material. It is great to see Frog God Games coming out with a version of Swords and Wizardry in this format. I also like the fact it is a boxed set. There been several attempts at releasing boxed sets for various clones. While cool it is barely on this side of doable for many OSR publishers. The handling and shipping is murder for most. It is great that Frog God Game taking a run at this and I hope it works out economically for them.

So if you are interested stop by the kickstarter and see it interests you.

It's cool. I just wish I had the cash to buy in right now.